6 Beloved Animals We May Soon Lose Forever to Extinction 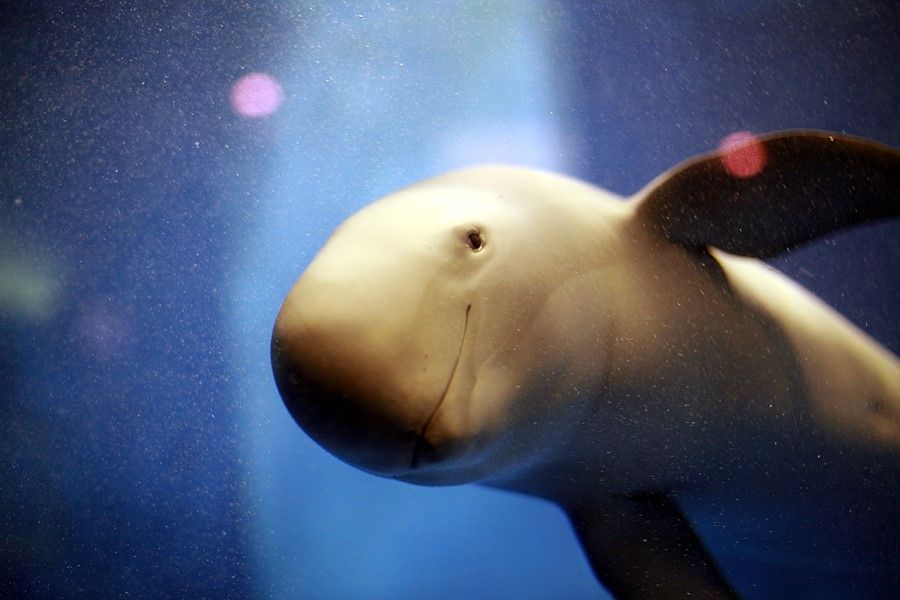 Remember all those family trips to the zoo when you were a child? I was always captivated by the elephants’ enormous size and strength. I remember how they wandered around their enclosures aimlessly with an air of hopelessness after years of captivity. Families would clap, cheer and bang their palms against the glass as elephants slowly paced the periphery of their enclosure, demonstrating nothing but their lifelong entrapment and depression.

I always hoped I would one day get the opportunity to see an elephant, free and healthy, in the wild. Now an adult, I understand I will probably never be lucky enough to see such an animal thriving in its natural habitat. With the extinction of so many glorious species on the rise, it is unlikely that future generations will get to see such fantastic creatures, even from behind the cold, cruel glass of an enclosure.

Humans are behind the harsh extinction of so many of the wondrous creatures we share this planet with. Ever since we could endanger the animals that have existed alongside us, we have. We have learned so much from animals than we could have ever imagined about our own evolution. To the fantastic wildlife from which we have learned this invaluable knowledge, we show our appreciation by polluting the air, land and sea. We have ravaged this world and the creatures who inhabit it with our plastic consumerism and poisonous pollution, bringing them closer to extinction every day.

Here are six beloved species we may soon lose forever: 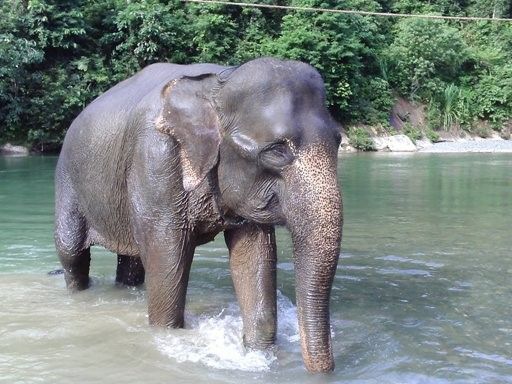 The Sumatran elephant is one of the many critically endangered species in Sumatra, Indonesia, among the Sumatran tiger, rhino and orangutan. This wondrous creature plays a vital role in the forest ecosystem as they feed “on a variety of plants and deposit the seeds as they travel.” Since Sumatran elephants reside in the most tropical, broadleaf forests, they are most vulnerable to deforestation; however, they are also poached for their tusks to be sold illegally on the ivory market.

Because of deforestation, elephants often encounter human settlements, raiding “ crops, tramp[ing] homes and sometimes even hurt[ing] or kill[ing] people. Those affected sometimes retaliate and poison or shoot elephants.” Having lost half of its population in one single generation, the Sumatran elephant has been placed on the list of critically endangered species, and there are now only 2400 to 2800 left. Over the past 25 years, the species has lost a disheartening 69% of its habitat, as specified by the International Union for the Conservation of Nature. (IUCN) Sadly, it is now at risk of becoming extinct within decades. 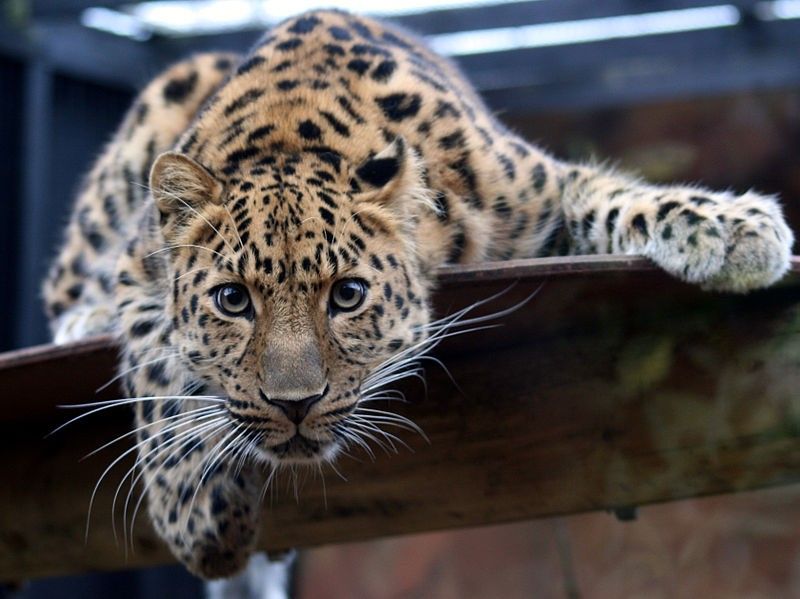 This beautiful, wide-eyed creature is the “north most of all leopard species,” enduring extreme cold winters and extremely hot summers. The Amur leopard live in far eastern Russia and is also believed to reside in North Korea. The leopard is “nimble-footed and strong”, leaping up to 19ft horizontally and running up to the staggering speed of 37 miles per hour!

Devastatingly, this magnificent animal has been declared critically endangered, since there are only 40 Amur leopards left in the wild (as specified by the ICUN red list). They are poached for their “beautiful spotted fur”, which is known to sell for $500 to $1000. Since many agricultural villages, such as Barabash, Russia, lie on the periphery of such mountainous forests, the leopards are unfortunately close enough that poaching is a regular occurrence. Fortunately, the Russian government declared that 650,000 acres become the Land of the Leopard National Park in 2012, protecting the rare species from poachers and deforestation. 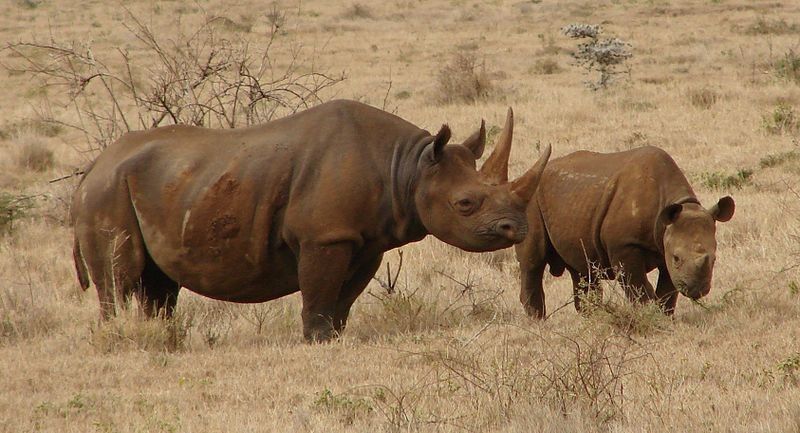 Weighing up to 1,760 to 3,080 lbs, (125-220 stone) and growing up to 6ft, the black rhino is a force to be reckoned with. While the species has a reputation for having a fiery demeanor and fierce attitude, rhinos are solitary herbivores who are on the brink of extinction.

The rhinos carry impressive horns that make them a target for hunters. Their horns play an essential part throughout their lifetimes; males use their horns to battle attackers and females use them to protect their young from danger. With the commercial demand for the rhino horn, the black rhino population is rapidly declining. In China, the horn is believed to be an ingredient for quack “medicine” while in North Africa and the Middle East, the horns are made into jewelry, tools and dagger holders to be sold.

While rhinos can run extremely fast, reaching speeds of 55 km/h, they have poor eyesight “and cannot easily detect an observer standing more than 30 metres away”, making them vulnerable to poachers. Between 2007 and 2011, there has been a shocking 5000% spike in rhino poaching in South Africa. 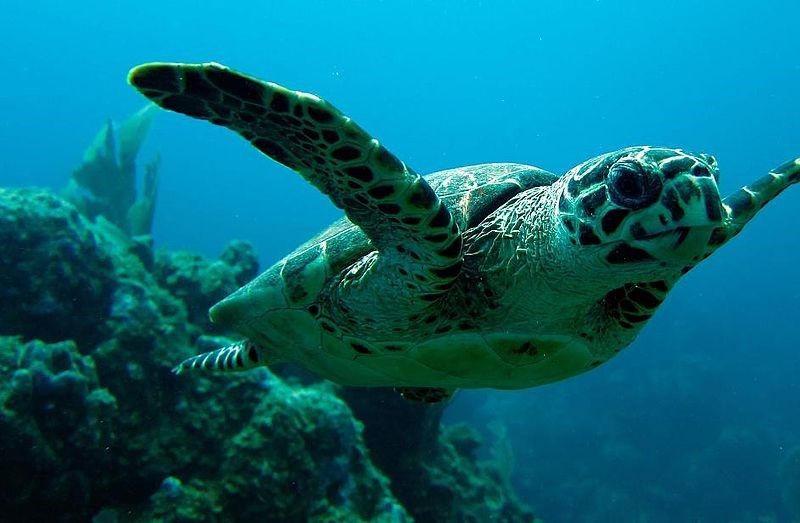 This spectacular sea creature is one of the smallest species of turtle. Typically located in warm tropical coastline waters, the hawksbill is considered the most beautiful of the sea turtle species and yet they are likely the “most endangered sea turtle population worldwide.”

The hawksbill turtle is sadly prone to numerous human-related threats, from getting accidentally caught in industrial fishing nets and being poached for their intricately designed shell to having their eggs served as ‘delicacies’ in restaurants.

It is possible that the greatest push towards their extinction is light pollution. Turtle hatchlings instinctively follow the light of the moon from the beach and into the sea; however, artificial city lighting is confusing the hatchlings, leading them into noisy, crowded cities instead. Their population plummets as thousands of turtle hatchlings are fatally crushed by traffic in coastal towns.

The Sea Turtle Conservancy advises coastal cities to use “turtle safe lighting- red lights that emit a very narrow portion of the visible light spectrum, which is less intrusive to nesting sea turtles and hatchlings.”  For individuals like you and me, the organization suggests tinting windows that face the beach and closing curtains or blinds to shield indoor lights visible from the shore.

This small, finless porpoise inhabits the longest river in Asia, the Yangtze. Sadly, the porpoise used to share the river with the Baiji dolphin, who became extinct in 2006 as a direct result of human activity.

The species population is declining at a devastating rate of 13.7% per year due to human activities such as shipping, sand mining, illegal fishing, water projects and pollution. Because of this, dead porpoises are commonly found in Dongting and Poyang lakes as well as the Yangtze River.

The WWF has been working alongside the government for years to ensure the protection and conservation of the species’ habitat along the Yangtze, reconnecting more than “40 floodplain lakes with the main stem of the Yangtze River to restore seasonal flows and allow the migration of species, like the finless porpoise.”

Only about 1000 porpoises remain, and if we fail to act swiftly, the mammals may have less than a decade left of existence. 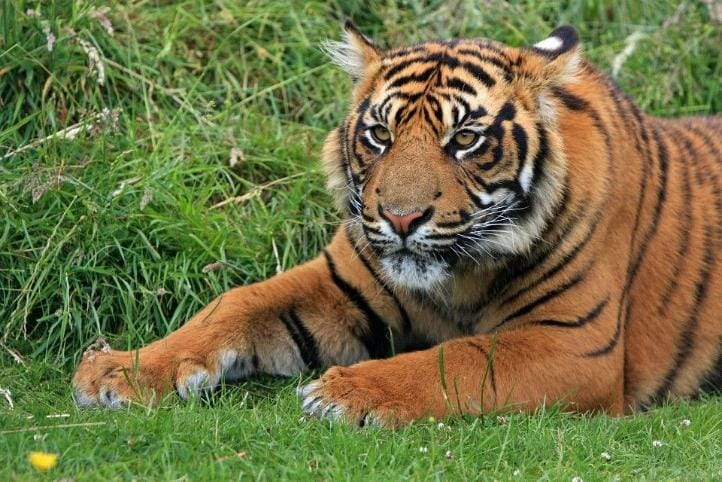 With only a few individuals left in captivity, this incredible subspecies is unfortunately already extinct in the wild. When the species roamed free, the tiger “lived in wet forests with dense vegetation and enough water and prey, naturally.”

There were once over 4,000 tigers in the wild; however, the South China tiger has been hunted to extinction since the 1970’s when the Chinese government decided they were ‘pests’.

Despite enforcement of laws against tiger hunting in China and other conservation efforts, it is thought that there are no existing protected areas that are healthy, undisturbed or large enough for the population to recover. The species were crammed into fragmented habitats that spanned up to a meagre 200 square meters and, unsurprisingly, were not large enough to sustain the tigers. The South China tiger is predicted to be the next species to become completely extinct.

Humans are the biggest threat to the most awe-inspiring creatures that walk the earth; We hunt, poach, destroy and profit. With urban expansion and our obsession with non-renewable fossil fuels, we have cut, scorched and ripped valuable ecosystems from the ground as if we were pulling weeds from our gardens. Our light, land and sea pollution hinders the natural wildlife around us to the extent that entire species are dying before our eyes. Captivity, climate change and animal cruelty all exist because of humanity. Human activity is undeniably at the black heart of the planet’s speedy deterioration. And it is up to each of us to save the animals and the Earth.

See also 3 QUIRKY JOBS THAT HELP SAVE THE WORLD