5 Deadly Diseases Linked to the Meat and Dairy Industries 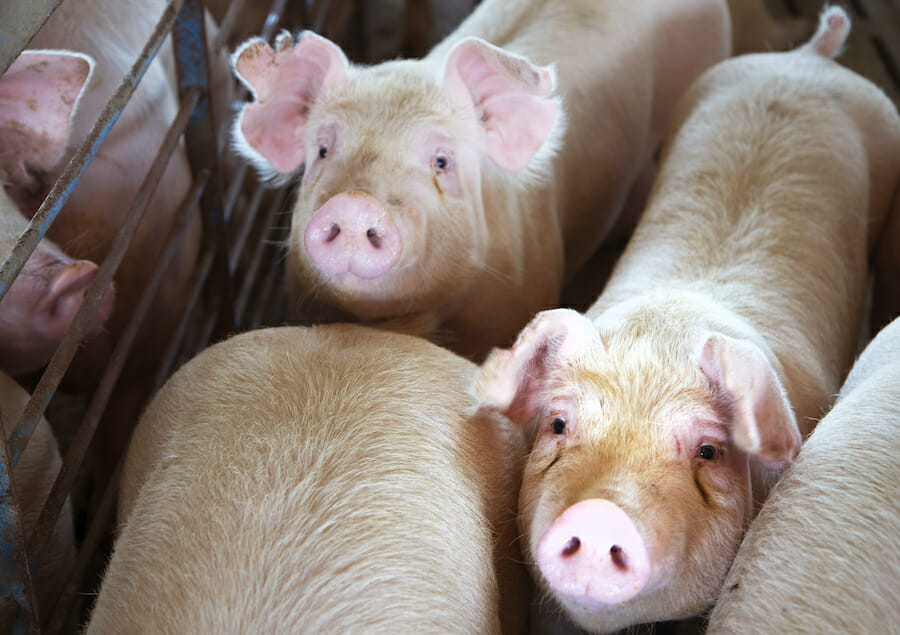 Hogs live out their last days in the "finishing shed," where they are grouped by weight to give smaller animals a fair chance at food. Original image from Carol M. Highsmith’s America, Library of Congress collection. Digitally enhanced by rawpixel.

The meat and dairy industries, especially those that sell live animals directly to consumers, are breeding grounds for deadly diseases and illnesses. Cows, chickens, pigs, birds, and others are crammed into small buildings and cells, bringing together thousands of animals in very tight spaces. If one animal is sick, the rest of the population is immediately at risk.

Such disregard for these creatures’ health and wellbeing is both abusive to animals and dangerous to humans. From dirty air and water to the overuse of antibiotics, the meat and dairy industries are perpetuating the spread of bacterial infections, especially antibiotic-resistant strains, viruses, and other zoonotic diseases.

With the recent COVID-19 coronavirus outbreak, the world is starting to realize the dangers of animal agriculture, and it’s about time. Fortunately, changing the way we treat animals can help avoid these pandemics in the future.

Here are 5 deadly diseases linked to the meat and dairy industries:

While the jury is still out on which animal is ultimately responsible for COVID-19’s jump to humans, scientists and other experts are confident the virus originated in bats and spread to humans through a Chinese wet market.

At these wet markets, animals, both alive and dead, and people are put into close proximity, creating an ideal environment for viruses and other diseases to spread from host to host.

“Poorly-regulated, live-animal markets mixed with illegal wildlife trade,” the Wildlife Conservation Society said in a statement, “offer a unique opportunity for viruses to spillover from wildlife hosts into the human population.”

Fortunately, China and other Asian countries are starting to crack down on wildlife trading. Proposals to ban the dog and cat meat trade are being considered, China has outlawed eating wildlife, and Vietnam might permanently ban their wildlife meat trade. Hopefully, this pandemic shows the importance of animal welfare for both animals and humans.

Before the recent COVID-19 outbreak, the last time the World Health Organization declared a pandemic was for the swine influenza. H1N1, which is the term given to the variant virus that eventually jumped from pigs to humans, was first discovered in April 2009. By April 2010, the CDC estimated that anywhere from 151,000 to 575,000 people died globally as a result of the H1N1 pandemic.

Swine flu likely originated due to frequent contact between farm workers and pigs combined with unsanitary factory-farming conditions and a lack of concern for animal welfare. Unfortunately, once the genie is let out of the bottle, there isn’t much we can do to put it back. To this day, H1N1 circulates as a seasonal flu virus.

Also called avian influenza, bird flu can jump from chickens and other poultry livestock to humans. Though never as severe as swine flu, avian influenza A viruses H5, H7, and H9 have infected people, with the H5N1 and H7N9 strains being the most common.

Since 2013, at least 1,500 people fell victim to H7N9 and over 600 died as a result of their illnesses. While these statistics pale in comparison to both the COVID-19 and H1N1 pandemics, they do show how increased exposure to sick birds is a dangerous game to play. With over 9 billion chickens slaughtered every year in the United States alone, the opportunity for zoonotic spillover is concerning.

How is all of this related to the meat and dairy industry? The FDA currently allows farmers to administer antibiotics to their livestock as a “disease prevention” tactic, leaving meat- and dairy-consuming humans to massively and unknowingly overuse these important drugs.

“To keep these miracle drugs working when sick people and animals need them,” Interim Director of Food and Agriculture at the Natural Resources Defense Council, Lena Brook, said, “[the] FDA must end the widespread practice of using these drugs for so-called ‘disease prevention’ and set clear targets for antibiotics reduction in [the meat and dairy industries].”

If we don’t drastically change our current food system, a U.N. report estimates that over 10 million people per year will die from drug-resistant infections by 2050. The easiest way to ensure you’re not ingesting unnecessary antibiotics is to adopt a plant-based diet.

Unfortunately, like MRSA, salmonella is starting to develop immunities to certain antibiotics, which makes treating severe cases much more difficult for health professionals. As more animals are forced to live in closer proximity to others, factory farms ignore animal welfare standards, and environmental protections aren’t awarded to those that live near these facilities, salmonella outbreaks could increase in frequency.

We must start working toward a cruelty-free food system. Our lives, and the lives of billions of animals around the world, depend on it.