For over three years, more than two dozen squirrel monkeys were held hostage as subjects in an FDA study on nicotine addiction.  After decades of research, with definitive answers each time that yes, nicotine has been proven to be addictive, experiments such as these still take place in U.S. government labs and universities, both public and private.  That these needless experiments continue to be funded by your tax dollars flies in the face of results already published by consumer groups.  Last year, four of the squirrel monkeys involved in this nicotine study died. When word got out about the deaths, advocates quickly began criticizing the Arkansas ‘research’ lab.

Ms. Jane Goodall, founder of the Jane Goodall Institute and renowned worldwide as an advocate for monkeys, apes, chimps, etc., sent a heartfelt letter to the FDA, calling such experiments ‘taxpayer-funded torture’,

“I’m sure most Americans would be horrified their tax dollars are paying for this abuse.”

The FDA ended the study but still caged the monkeys on site. Advocates such as the Gregory J. Reiter Memorial Fund, also profoundly disturbed about the testing, the deaths and the waste of money and lives, began working to gain the release of all the test subjects, especially after learning that one of the captive monkeys was, in fact, named Gregory. 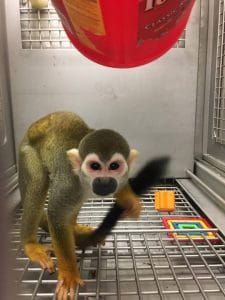 Another national advocacy group, the White Coat Waste Project (WCWP), who champions many animal rights causes, has found politicians on both sides of the Congressional aisle who are also animal advocates. Together, they fought to gain the release of the captive monkeys.

And then, fantastic news arrived! In November, the squirrel monkeys involved in the study were granted their freedom.  The 26 monkeys found new homes in Gainesville, Florida, with Jungle Friends Primate Sanctuary.

Per reports, the monkeys were in poor condition, with stress causing at least one to chew his own tail; dehydration, hair loss and unexplained wounds were also found on the released monkeys.

According to WCWP, these baby squirrel monkeys were kept in solitary confinement for nearly 36 months.  During that time, as seen here, nicotine delivery devices were implanted in their arteries; then they were ‘locked in restraint chairs’ and force to press levers to get hits of nicotine.  The FDA secretly filmed the experiments.  And for this, taxpayers were billed $5.5 million dollars. Does this sound like an ‘experiment’ that can be justified, or one that you’d like to chip in for?

Kari Bagnall, founder & executive director of Jungle Friends Primate Sanctuary, is extremely excited about the liberation of the monkeys.  She told Lady Freethinker,

“The release of these monkeys from nicotine studies at the FDA is unprecedented! We are confident this will open the door for other monkeys in research to retire to sanctuaries.”

According to CNN, Jungle Friends’ retirement plan for the 26 new arrivals, who have never touched dirt, a tree, or grass, is a gradual transition to life in the sanctuary’s outdoor habitats.  The outdoor release is expected this coming spring; and Gregory is one of the lucky survivors! Jungle Friends releases a calendar each year featuring the primates in their sanctuary.  How appropriate that the theme for the new calendar is “From Research To Retirement.”
The WCWP, a bipartisan coalition, is dedicated to exposing the inhumane treatment and wasteful budgetary spending surrounding animal experiments, AKA vivisection, carried out in U.S. labs, such as the one in which these squirrel monkeys participated.  Many of your tax dollars go towards funding these repetitive, wasteful ‘experiments’.

The research may involve cats, dog, rabbits, rodents and primates; these involuntary ‘test subjects’ run the full spectrum of the animal world.  When polled, the majority of the public want this research and these facilities shut down.  In multiple cases, by working with members of Congress, WCWP advocates and other groups are successful in shuttering the doors of various labs and facilities.  Often, the animals are euthanized in the labs in which they’ve lived, without offering them up for adoption, rescue or to a sanctuary. These 26 sentient beings were the most current exception to that sad fact.

Though there are some who may be concerned that the end of animal experimentation would also mean the end of developing cures for diseases, the same governmental agencies who are conducting the studies admit that more than 90% of the drugs that pass animal tests fail in human trials.  The drugs either do not work or are dangerous, wasting time, dollars and sacrificing lives.  The FDA is currently pursuing initiatives to reduce reliance on animal-based studies, but can certainly do more.  If you’d like information on the White Coast Waste Project, click here. 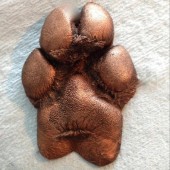 If it's covered by fur, feathers or fins, and anything in-between, Lisa will give it a voice. As a writer for Examiner.com, AnimalsVote.org and ShelterMe.tv, she covered issues that explored and exposed the complex relationships that humans have with animals. Major issues including Nosey the elephant and the dog-meat trade. Local heartwarming stories of new furever homes and second chances. Lisa welcomes your feedback, interest and ideas here with Lady Freethinker!