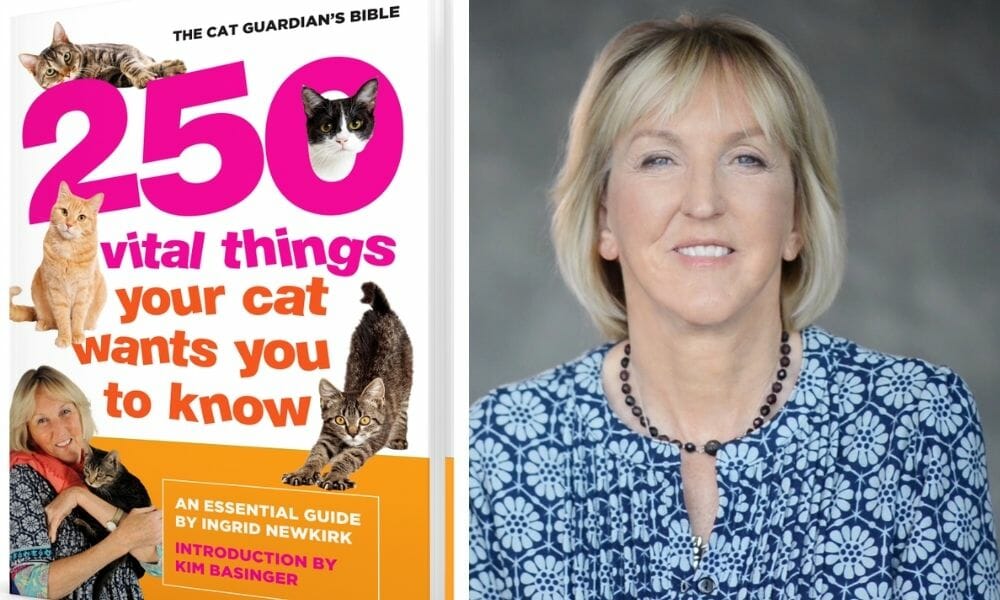 From creating an enriching and safe home environment to getting better at reading cat body language, Ingrid Newkirk’s “250 Vital Things Your Cat Wants You To Know” is sure to include enlightening tips for both new pet parents and veteran cat guardians.

Newkirk, who is the co-founder and president of the People for the Ethical Treatment of Animals (PETA), has more than four decades of experience in the animal welfare movement – as well as dozens of interesting and amusing stories about cats that she is eager to share with readers.

The book has two simple goals: to make your cat happier, and as a result, to make you happier, too.

Called “The Cat Guardian’s Bible,” this new essential guide walks cat guardians through everything from identifying poisonous plants and cleaners that you won’t want to bring into your home to constructing cat patios – or “catios” – to give your feline friend a safe place to hang around outdoors.

Gems of chapters also include tips for introducing new cat members to your fur family, steps to take to recover a cat who slips outdoors and goes missing, how to minimize trauma during travel for your cat (if you must travel), and a quiz to see if your current cat practices will make you your “cat’s meow.”

In the interview below, Newkirk shares highlights of the book, as well her inspiration to write it, with Lady Freethinker.  Answers have been edited for length.

To order a copy of the book, check out PETA’s website here. Or to learn more, you can also register for Newkirk’s upcoming virtual book talk on January 25 here. 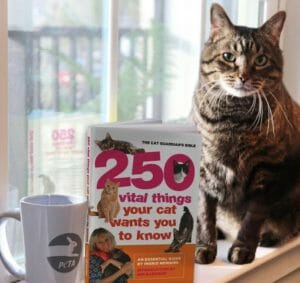 A Q&A with Ingrid Newkirk, PETA President and Author of “250 Vital Things Your Cat Wants You To Know”

It was a litter of kittens that catapulted you into animal welfare work, wasn’t it?

I spent most of my childhood in India. I hadn’t realized — having seen cruelty on the streets in India, right in front of you — that when I came to the United States, there was cruelty, but it was mostly hidden away, in places you wouldn’t ordinarily go.

I moved to the country, in Maryland, and my neighbor moved away and left all these kittens behind and this nursing mother cat. So I thought, “Well, this is the United States of America, animals are well taken care of here.” I was very naive; I drove them to the animal shelter listed in the Yellow Pages. I said to the person at the counter that someone had abandoned these kittens, and she took them. About 15 minutes later, I walked back into the kennel area, just to have a look around, and they had already euthanized the kittens — not even giving them a chance. I was so upset by that; it made me apply for a job there.  It was just a sad and awful place; it wasn’t well funded, the people weren’t very kind, and we ended up reforming the whole place in the end. I became a cruelty enforcement officer in that shelter, then moved on to the District of Columbia, and operated what was then the DC dog pound. That eye-opening moment made me want to try very hard to enforce cruelty statutes, sterilization, adopting only to responsible people, and do everything I could to make sure that not only cats, but all animals, were respected.

What inspired you to write a book about cats?

Back in 2010, when there was the BP Oil Spill in Louisiana, all these people lost their jobs and they fled the state, and unfortunately, many of them left their animals behind. PETA took a Winnebago down to Louisiana and we said to some of the most overcrowded shelters, “Give us your worst.” So we brought 60-some cats back to Norfolk. We had an Adopt-A-Thon. All of the cats were adopted except a little family of three. There was Marshall, who has three and a half legs; his wife Brandie, who had lost almost all her hair from stress; and their daughter Bubbles, who is afraid of everything. We wouldn’t split them up, and nobody wanted to take three. So they have lived with us since 2010 in the PETA office. I thought that all we’ve learned, in trying to make them comfortable and know they are safe forever, and look after them and amuse them, and any mistakes we’ve made along the way… I think that would be the foundation of a book, in which I can put my 42 years of experience with cats to help other people.

Why did you want to make this book so accessible to all cat guardians, whether they are new pet parents or veteran cat guardians?

All sorts of people have cats for all sorts of reasons, so I wanted to make it accessible. You can be really extravagant when it comes to satisfying your cats, but I always say that cats are cheap dates. You don’t have to have any money to do wonderful things for them. The No. 1 thing that anyone can give them, and which many people overlook extraordinarily enough, is affection.

People get a dog, and that dog shows you exuberantly what he wants — scratching at the door, picking up the leash. A cat is more subtle. But that doesn’t mean that a cat doesn’t have deep needs. A cat adores you if you are good to that cat.

Can you give us an example from your own experiences with cats about why paying attention to their body language is so important?

A friend of mine has a cat, we’ll call him Roger, and I’ve seen this in other homes in other ways, who said, “He is just a grumpy old man these days.” When Roger was taken to the vet for something else, the vet said, “Will you put Roger on the floor and let me see him walk?” And it turned out that Roger could navigate passably in my friend’s house because he knew it, he had been there for years, but he had a brain tumor that was pressing on his eye, and that made his vision really blurry so he couldn’t walk anywhere else properly. The vet picked that up — that what he didn’t want you to do was pet him because his head hurt, so he spat and he growled. He wasn’t a grumpy old man; he was a man in pain.  So when people say to me, “That cat is just getting old,” or “That cat is just grumpy,” I always think “Don’t assume.” If your cat is doing something that inconveniences you or seems abnormal, don’t ever just brush it off. Go to the vet. Rather a vet than a regret.

What would you like to say about de-clawing cats?

Never, ever, ever declaw a cat. People don’t realize they don’t just take the nail out when they declaw, they take that whole first segment, with the bones and the sinew and the muscle and everything, and the cats are screwed up for the rest of their lives. They don’t trust you anymore. They may not even use the litter box properly anymore, and they can’t balance anymore, which throws them off.

What kind of feedback have you gotten so far about the book?

I’ve gotten great positive feedback. I’m really pleased because I do hope it is enriching the lives of cats and their guardians. But one thing I think is very important, which people get in touch with me about, is never letting your cat outside unsupervised.

What should readers know about why they shouldn’t allow their cats outdoors unsupervised?

Many people think it’s cruel not to let your cat outside, so I have a chapter in my book about why it isn’t. It’s so unsafe. I have been a humane officer for many years, and I have seen what people do to cats they don’t like. I have also seen cats being let out and they’ve been hit by a car. Cats do travel; they go down sewers; they go into drains looking for things, chasing somebody, and then water comes along and they can’t find their way back or they are swept away. Dogs attack them. Raccoons attack them. They get parasites from birds and other little animals they catch.

Also, as a humane officer, I did find juveniles who were in a sort of pretend satanic, ritual club who had tortured cats hideously. PETA’s investigations department has busted satanic rings and has saved cats; some cats we have not been able to save, when we’ve come in only after the fact having found the video of the ways they have been mutilated.

You can use a harness and go walking with them; they will get used to it. You can make a Catio, either cheaply, or buy an expensive one if you have an outdoor place. Give them a room with a view. Look for other ways to entertain them, but keep them safe. It’s no more safe to let a cat out alone, unaccompanied, than if you opened your door and shooed your toddler out into the streets.

You also talk about “bunchers” in your book — people who swipe stray or companion cats from the streets and then sell them to laboratories for experiments.

One of the most haunting pictures I have ever seen is of a cat named Double Trouble, who was in a laboratory. They have opened up her head and put electrodes in it, and she is sealed in a bag and they are monitoring her eye movements. They let her go without food and without water so that she would perform tasks by looking at things with her eyes in certain ways. There are thousands of cats in laboratories in truly cruel, painful, and pointless experiments. It’s just atrocious, and we have stopped a lot of them, including the experiments that Double Trouble was used in.

But there are unscrupulous people called bunchers who go around and look for cats and sell them to laboratories. It happens all the time. So if your cat goes missing, there’s probably nothing worse than wondering where they ended up.

You have a virtual book talk scheduled for Jan. 25. How can our readers sign up?

It should be great fun, with lots of tips, little stories, and video clips that will make you laugh. If you go to PETA.org, there’s an invitation there or you can send us a message as to how to listen to this talk. It’s just 25 minutes. There will be gifts for anybody who buys the book… things like catnip toys and a beautiful collage postcard that one of our members, an artist, has put together that will go out with the books. If you buy five or more, they get all sorts of things, like a cat grooming mitt or a cat necklace. So please go to PETA.org and find out all about it.