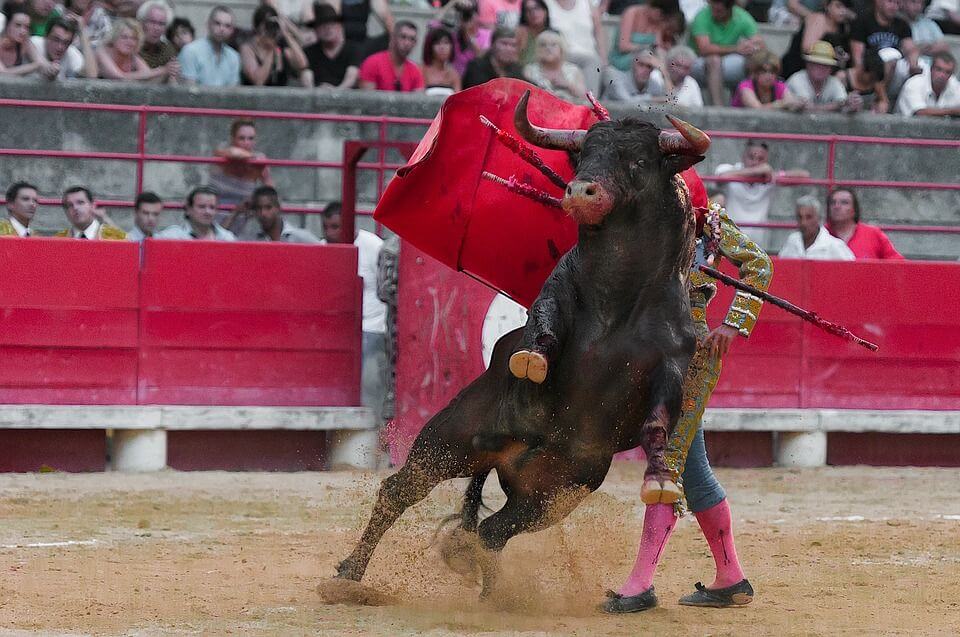 Sixteen people were injured last week in the Badajoz province of Extremadura, Spain after one of the animals destined for use in a bullfighting festival escaped from its enclosure. Among the injured were four children, ranging in age from only 18 months to six years. Five of the injuries — including those of a four-year-old boy — were serious enough to warrant a trip to the hospital. The fate of the bull involved in the incident is unclear.

This is the latest in a recent string of horrific injuries associated with the “traditional” torture of bulls throughout the country. In July this year, 28 people were injured at the San Fermin running of the bulls festival in Pamplona.

This week, deeply shocking footage was released of a bull dragging itself along the ground after breaking both its back legs during a festival in Spain.

There is very little legislation surrounding this horrific blood sport in the country; many of the nation’s animal welfare laws don’t apply, as the practice is protected by law under the  Spanish Constitution as part of “the right to literary, artistic, scientific and technical production and creation.”

Different areas such as Catalan and the Balearic Islands have attempted to introduce legislation banning bullfighting, or add measures to protect the bulls, but these cases are yet to be decided by the courts.

While Spain’s government debate the cultural value of this archaic and torturous sport, bulls and humans alike will continue to be injured and die due to these inhumane interactions.

It’s time to stop talking about it and take action. Join the 15,000 people who have signed our petition calling for a ban on bullfighting today.

VIDEO: Goose Who Stuck by Injured Mate’s Side Shares a Meal With Him After Successful Surgery