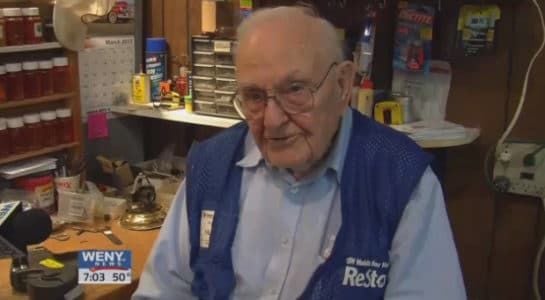 Harold Hager, who turned 100 years old on May 17, volunteers 20 hours a week at a Habitat for Humanity in Steuben County, NY. Hager was honored at a recent event for volunteering more hours than any other volunteer at the organization — an honor he received for the second year in a row.

The World War II veteran started volunteering shortly after his wife passed away in 2010; not wanting to sit around idly, he started giving back to his community.

“We were together for 71 years and one month almost to the hour,” Hager told WENY News.

“He works the equivalent of about a twenty-hour work week,” said Matthew Harmer, marketing and outreach coordinator for Steuben County’s Habitat for Humanity.

Despite a common narrative surrounding senior citizens — that they are a drain to the economy and weigh down on society — senior citizens are a valuable asset to communities. Older citizens have flexible schedules and more free time to volunteer. In fact, according to the Institute for Volunteering Research, based in the UK, elderly volunteers contribute more hours than any other age group, and are more likely to be content with the work and commit to it. Also, they “make more charitable donations per capita than any other age group,” according to EvidenceNetwork.ca.

Volunteer work does not only benefit the recipient. In the same way that owning animals can give senior citizens a sense of purpose and wellbeing, those who volunteer are reported to be healthier, both physically and emotionally, than their peers who do not volunteer their time. Whether good health predicts volunteering or the benefits of volunteering bring good health is unknown, but researchers suggest it may be a combination of the two.

One of the most notable benefits of volunteering for senior citizens is the social aspect. Many senior citizens see a decline in their “social capital” as they age — due to retiring, losing friends and spouses, or seeing family move away. Research from the Rush Alzheimer’s Disease Center in Chicago shows that those with frequent social contact experience cognitive decline at a 70 percent slower rate than those with low social activity. Overall, research has determined that volunteering has a positive effect on elderly individuals.

Hager’s next goal is to reach 105 years old. Giving his time, sharing his knowledge, and bettering the lives of those in his community through volunteering may just help him reach that goal.