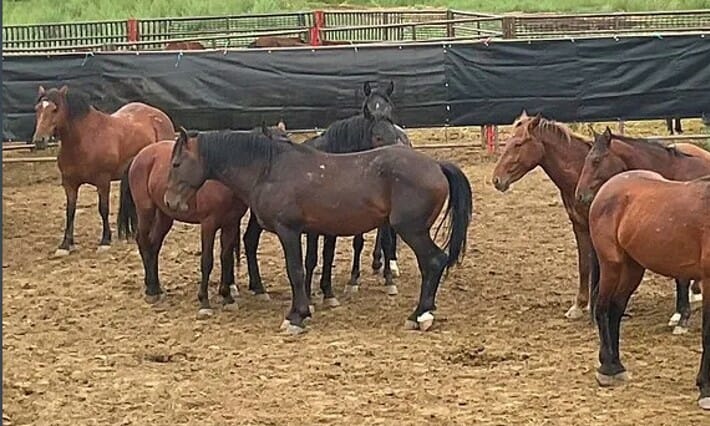 More than 100 wild horses who were removed from their range last summer by the Bureau of Land Management (BLM) and have since been kept at a temporary holding facility in Colorado now are dead, with their corpses on their way to an unspecified landfill.

Necropsies revealed that members of the West Douglas Herd have become infected with equine influenza, which has killed 119 wild horses – or about a quarter of the herd – as of early May, according to The Colorado Sun.

The BLM determined last summer that the craggy, remote, and inaccessible area that was home to the herd was “unsuitable” and ordered an emergency roundup that gathered 450 wild horses from the herd’s area along the Colorado-Utah border.

The federal agency then trucked the horses to the Cañon City holding facility.

While the agency’s stated goal is to brand, microchip, de-worm and vaccinate wild horses within 30 days,  dozens of the West Douglas herd’s horses still were not fully vaccinated more than eight months after arriving.

That factor, along with exposure to the Oil Springs Fire and heavy blowing dust and dirt in their holding corral, likely has made them more susceptible to the virus, which has been identified as the H328 type flu virus and the Florida Clade 1 sublineage, according to BLM documents.

By April 18, three foals were dead. Five days later, nine horses were found dead in their pasture, while others showed coughing, pneumonia and other respiratory illnesses.

On April 23, the BLM said via press release that 57 wild horses had died. By May 3, that number had more than doubled – to a horrific 119 wild, innocent animals gone forever.

The corpses are headed to a landfill, and the agency is focusing on how to prevent such an outbreak from happening again, said agency spokesman Steve Hall.

The American Wild Horse Campaign, a national advocacy group, is demanding an investigation into conditions for the horses while continuing their call for an end to inhumane wild horse roundups.

“We cannot continue to round up wild horses from their native habitats, cram them into holding pens and expect a good outcome for the wild horses or the taxpayers who are funding this broken system,” said AWHC Board Member Scott Wilson, who is based in Denver.

There are numerous, effective, and more humane alternatives than rounding up and removing wild horses from the range than the helicopter roundups used to entrap the West Douglas Herd, without which these innocent horses would likely still be alive and running free. These cruel gathers are notoriously known for the resulting deaths, injuries, and families separated forever.

If you haven’t already, sign Lady Freethinker’s petition urging an end to cruel helicopter roundups for wild horses and a transition to safer and more humane alternatives. It’s no less than these iconic animals deserve.