After suffering life-threatening injuries from bullets and a Russian airstrike, two lovable dogs from Ukraine received a second chance at mobility thanks to Ukrainian and U.K.-based animal rescuers.

Rescuers found Johnny shot, with his hind legs paralyzed, according to People magazine. The determined dog remarkably managed to pull himself two miles until the compassionate caregivers discovered him.  A Russian airstrike disabled the other dog, Phoenix, who lost his back paws and suffered a severely injured front paw.

Rescuers in Ukraine teamed up with U.K.-based Breaking the Chains Animal Rescue (BTC), which took in Phoenix and Johnny, People reported. The dogs received medical care and the love they deserve – as well as wheelchairs, provided by nonprofit Walkin’ Pets.

Both now are on the road to recovery, and hopefully soon will find loving forever homes. 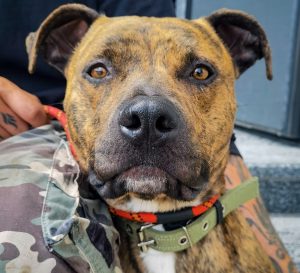 “Johnny loves his wheels and enjoys nothing more than running around in them showing off his skills in his new rims,” BTC wrote in a Facebook post.

Phoenix is “a special, happy and loving dog who needs a very special home like every dog that can facilitate not only his high wheel chair speeds but also the abundance of love he gives,” the organization posted in another Facebook post.

These two lucky dogs are sadly not at all anomalies in war-torn Ukraine. BTC reported that the group’s rescuers are working tirelessly day and night to bring food and supplies to front-line villages to help as many animals as possible, while witnessing “the ever growing destruction and tragedy the war has brung to the citizens, their pets and the street animals.”

Based on what BTC team members have seen so far in Ukraine, “The war is not getting better, it’s getting worse and there are so many dogs and cats that need our help.”

To learn more about adopting Johnny and Phoenix, and to support BTC’s works, visit the rescue group’s website, and remember – you can help dogs everywhere by adopting animals, and by never supporting pet stores or breeders. 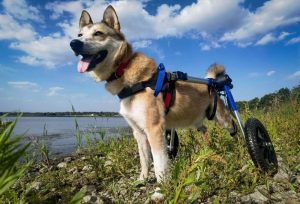