Undercover footage has revealed shocking and brutal treatment of conscious salmon at a UK slaughterhouse owned by a company that touts its animal welfare policies.

The Scottish Salmon Company — which slaughters an estimated 15 million salmon each year for the products it ships to more than 20 countries, including the United States — says on its website that it is committed to the highest standards of animal husbandry.

But video from an undercover investigator, obtained and released by the L.A-based animal welfare nonprofit Animal Equality, documented still-conscious salmon sliced open, clubbed repeatedly to death, or left to suffocate slowly on the floor at a plant at Arnish, on the Isle of Lewis.

Aquatics experts — including Mark Borthwick, the head of research at the Aquatic Life Institute– have called the footage disturbing, to say the least. 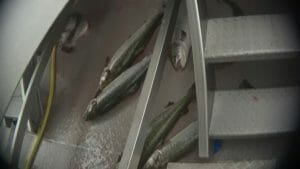 Fully conscious salmon left to suffocate on the floor of a plant that supplies the Scottish Salmon Company Facility. (Courtesy of Animal Equality).

“This footage is alarming,” Borthwick told Animal Equality. “A significant number of salmon are clearly conscious when their gills are cut, which could result in extreme pain for as long as seven minutes.”

A spokesperson for Scottish Salmon Company told Lady Freethinker that the company is investigating the incident and plans to take the matter “extremely seriously.”

“We are investigating an incident following receipt of an historic edited film, that shows isolated activity at our Northern harvest station,” the company spokesperson said. “This activity does not align with our stringent welfare code of practice, and does not in any way represent the operations of the company.”

Fish Are Sentient Animals Capable of Feeling Pleasure and Pain

A growing body of scientific literature points to sentience in fish; like cats and dogs, they can feel pleasure and pain.

But fish aren’t currently protected under the Welfare of Farmed Animals at the Time of Killing (WATOK) regulations. The UK’s statutory codes also lack any official guidance for farmed aquatic animals.

The lack of protections — and the brutal killing involved in many commercial fishing operations, as underscored by the undercover video — equals tremendous suffering for billions of fish each year, said Animal Equality President Sharon Núñez.

“Companies like The Scottish Salmon Company aren’t unique in their cruelty, and this investigation shows that we have much work to do in order to establish even basic protections for farmed aquatic animals,” Núñez said. “It’s the least these sensitive animals deserve.”

The Scottish Salmon Company spokesperson said the video shows a “historic” incident and that a full investigation is underway.

“We take this matter extremely seriously and are conducting a thorough investigation into this historic incident,” the spokesperson said. “To assist our investigation we have requested full unedited film footage. Given our significant capital investment, training in the proper handling and humane harvesting of salmon, and supervisory and leadership approach, we believe this to be a one-off isolated incident.”

The company spokesperson added that harvest processing sites are subject to regular audits from third party providers to ensure the company is meeting animal welfare standards.  The harvest station in the video has gone through “numerous audits which identified no welfare concerns,” the spokesperson said. 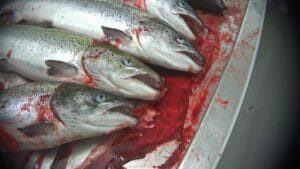 Protections for Fish at the Time of Death

Animal Equality and 70 other leading aquatic  animal specialists and animal protection organizations have issued an open letter to the UK’s ministers, calling for protections for fish at the time of death, legal training requirements, and on-site inspections.

While they continue their fight for fish, Animal Equality recommends people can help make a difference by taking these two steps: