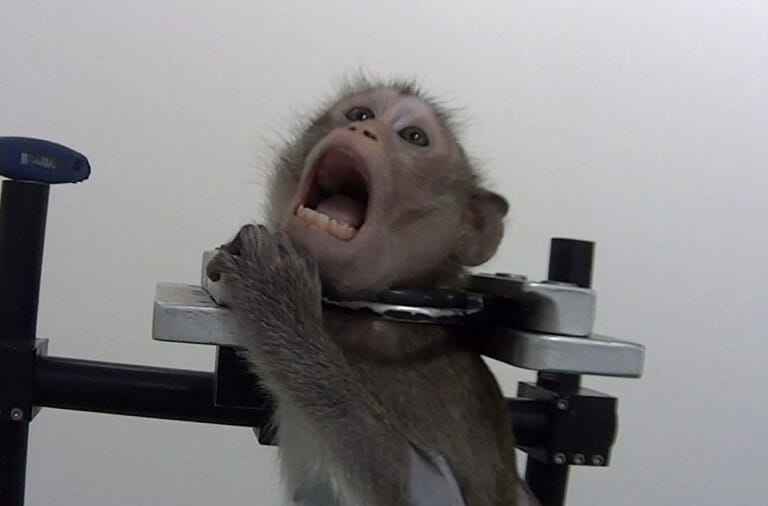 An animal testing facility near Hamburg, Germany, is under fire after graphic undercover video footage revealed horrific abuse and neglect of animals used for toxicity tests.

In the video released by Cruelty Free International (CFI) and SOKO Tierschutz, staff at the Laboratory of Pharmacology and Toxicology (LPT) use metal prongs to pick up macaque monkeys by their necks. One technician even slams a monkey’s head on a door frame.

Technicians restrain the helpless monkeys in metal harnesses for tests and force them to stand for long periods of time. In their tiny cages, the monkeys spin in circles and appear highly distressed.

Dogs are tortured here, too. In other scenes of the video, beagles lie in puddles of their own blood and feces. Some are motionless, with no veterinary care in sight.

Cats, too, cry out from barren crates. They have large sores on their legs where technicians have poked them with needles to obtain 13 blood samples over 10 hours, according to CFI.

The video also shows technicians forcing tubes down the animals’ throats to pump liquid into their stomachs as they squirm and resist.

“Our investigation has uncovered appalling animal suffering, inadequate care, poor practices and breaches of European and German law,” Chief Executive of CFI Michelle Thew said. “We are calling for LPT to be closed. We are also calling for a comprehensive review into the use of animals in regulatory toxicity testing in Europe, including the UK. Every investigation, without fail, shows a similar tale of misery and disregard of the law.”

SOKO Tierschutz joined CFI in denouncing the demonstrated animal cruelty as illegal. Both organizations are calling for the facility’s shutdown.

Authorities conducted nine inspections of LPT since 2015. After a recent surprise visit, inspectors witnessed “long-term harm and considerable suffering” and confirmed that 44 monkeys lived in “far too small cages.”

CFI reported that “a local veterinary authority” took action over the monkeys’ cage sizes, and criminal charges of animal cruelty have been filed with German prosecutors. Still, more must be done on behalf of these innocent victims.

We must take action to end these animals’ suffering and protect lab animals from senseless harm. Learn more and find out what you can do to help at Cruelty Free International’s website.