Home » Green » The UK Will Soon Have More Plastic Waste than it Knows What to Do WithBy Eve Danzeisen | January 8, 2018

A new ban on importing waste into China is about to have dramatic impacts on the UK. Every year, the UK exports about half a million tons of plastic waste to China and Hong Kong. With that door suddenly shut, unless government and industrial leaders act fast, that half a tonne of plastic waste is going to pile up fast. Right now, the announcement is causing chaos, but with a little luck (and good governance) there’s a chance that this could push the UK to enact long-lasting sustainable solutions.

Announced to the World Trade Organisation in 2017, the ban isn’t aimed at changing UK exports directly, but rather at curbing the volume of hazardous “foreign garbage” that China gets stuck with every year. If you’re wondering why China was accepting all this plastic in the first place, it’s because most of it is recyclable. For years, China has imported most of the world’s recyclable plastic waste and reused it in manufacturing. But every shipment is contaminated with some level of “dirty and hazardous wastes.” To reduce the damage pollution is doing to China’s people, animals, and nature, the new ban will forbid the import of 24 types of solid waste, including plastic, cardboard, and cotton.

The scale of the problem

Every year, 12 million tons of plastic enters our oceans. In the UK alone, 35 million plastic bottles are thrown away every single day. This isn’t just messy; it’s deadly. A scientific expedition led by Greenpeace revealed remote coastlines in Scotland – nowhere near people – were littered with plastic, polluting food sources and disrupting what should have been pristine coastal ecosystems.

When asked about the impending plastic buildup, UK Environment Secretary Michael Gove admitted, “I don’t know what impact it will have …And to be honest, I haven’t given it sufficient thought.”

The Recycling Association of the UK (TRA) has tried to meet with Gove to offer solutions. As the country’s largest producer of recyclable materials, TRA are leading the push for a more sustainable industry. TRA’s Quality First Report (2017) recommends dealing with the Chinese ban with new regulations for quality control and improvements to packaging. It also recommends adoption of the EU Circular Economy Stakeholder Platform, regardless of Brexit, which promotes shared environmental goals and a Europe-wide circular economy. So far, Gove has refused to meet. 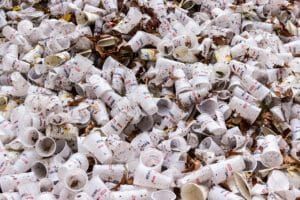 The take-away: implications for consumers

The UK’s Environmental Audit Committee (EAC) recommends pushing for system-wide change by taxing notorious waste items like disposable coffee cups. But with the so-called “latte levy” in place, there’s no guarantee that manufacturers will adopt cleaner alternatives. Companies producing low-quality mixed materials can simply pass on the tax to the consumer, upping the cost of your morning coffee without doing nature any good. That’s why we need regulation that rewards companies using non-recyclables and pushes countries to develop better habits of dealing waste in their own backyard, instead of making it someone else’s problem.

This ban on exporting plastic pollution is a wake-up call for the UK. It’s time the government invested in long-lasting sustainable solutions to messy mixed-material waste. Humans created this problem, and humans can solve it.