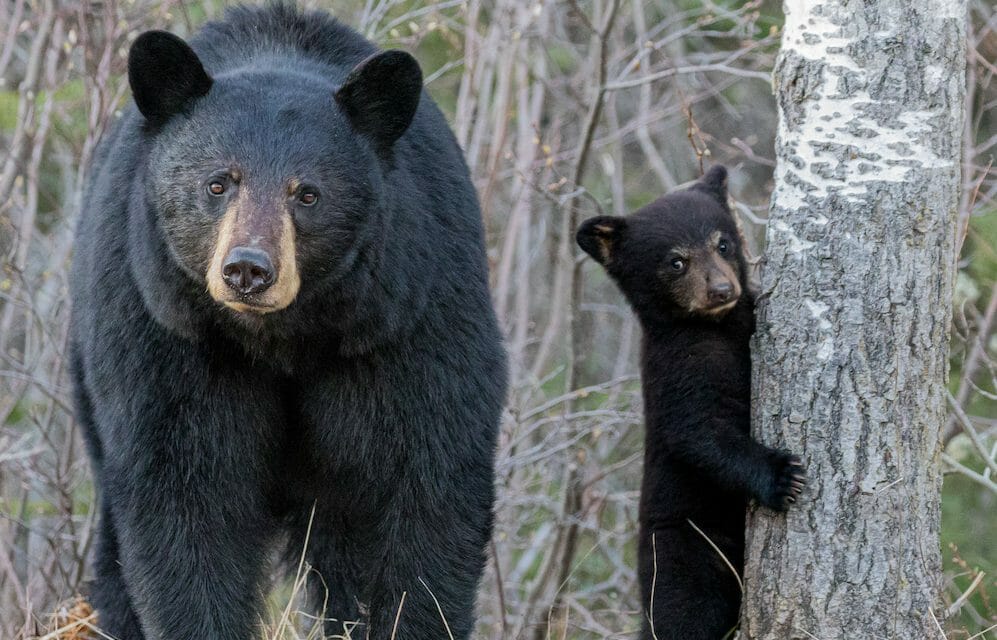 UPDATE (11/28/2022): The state wildlife commission nixed plans for a 2022 spring bear hunt with a 5-4 vote earlier this year, then followed up in another 5-4 vote in November to indefinitely suspend the spring black bear hunts, according to news reports. Prior to this decision, Washington was one of only eight states that allow these cruel spring hunts, and this is wonderful progress for bears! Thanks so much to everyone who signed our petition!  —Lady Freethinker Staff

Last spring, 124 black bears who emerged from their dens to greet the spring were shot to death by hunters in Washington’s annual spring hunt – including at least one lactating mama bear who likely left orphaned cubs behind, according to data presented to the Washington Department of Fish and Wildlife (WDFW).

The annual spring hunts, although a staple in the state since the 1970s, are controversial, with numerous groups saying that sluggish and starving bears emerging from long winter hibernations are easy targets and that the killings can orphan vulnerable cubs who then likely die from exposure to the elements, predation, or starvation.

Last November, WDFW’s Fish and Wildlife Commission stopped plans for a 2022 spring bear hunt with a split 4-4 vote, with commissioners in favor saying the hunt was necessary bear “management” and opponents saying there was no evidence that the spring hunts were needed – especially given that an estimated 2,000 bears were massacred in fall hunts.

But now the WDFW is reconsidering, after receiving a petition from a pro-hunting group, with plans to grant 664 special permits that they anticipate will lead to the death of at least 145 black bears this spring. The proposed amendments also would make the spring hunt permanent, rather than conditional upon the current yearly renewal process.

While the proposed rule would  – on paper – prohibit hunters from killing cubs less than one year old or female bears sighted with offspring in tow, foraging mothers aren’t always with their cubs, and hunters can’t always accurately tell the sex of a bear before they shoot her.

Washington is one of only eight states that permit the spring hunts, despite 80 percent of people in Western states saying they oppose the cruel practice, according to a 2019 study by the pro-hunting organization National Shooting Sports Foundation.

The Commission is accepting public comments from Washington residents through March 12 and is expected to make a decision about a 2022 spring hunt in mid-March, with a shortened hunting season possible for May 1 through June 15 if approved.

This cruel spring killing, whose proclaimed “benefits” aren’t backed by data or science, must not take place in Washington this year — or any other year.

Sign our petition urging the Washington Department of Fish and Wildlife and the WDFW’s Fish and Wildlife Commission to prohibit a 2022 spring bear hunt, bar any proposal that would make such a hunt permanent without annual review, and also end these cruel hunts for good.

Then, if you are a Washington State resident, please write to the Commission by March 12 and politely express your disgust that these spring bear hunts are still happening, that you denounce the proposed 2022 spring bear hunt, and that you’d like to see a permanent end to these cruel killings. You can submit public comments via the department’s online form here, email your comments to [email protected], or by mail to the WDFW Wildlife Program/PO Box 43200/Olympia, WA 98504-3200.