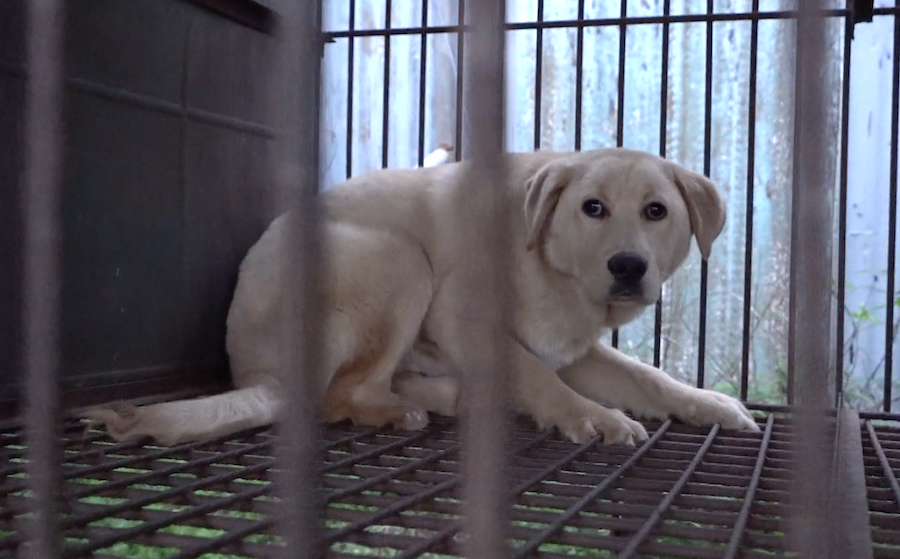 Lifted off their paws and into the air by a rope around their neck, helpless dogs are then slammed into cramped, metal cages on transport trucks at a dog meat auction house in Icheon, S. Korea, reveals footage in an undercover Lady Freethinker (LFT) investigation.

An LFT investigator documented activity at the Icheon dog meat auction house during May and June of this year, arriving on select days at 9:00 a.m. local time. By noon, trucks filled with dogs pulled into the auction house and unloaded the helpless animals into numbered, metal cages.

Around 2:30 p.m., trucks with empty cages pulled into the auction house, the dogs from earlier that day were bought, and workers stuffed the purchased canines into the empty cages for transport, likely headed to slaughter.

In one disturbing incident, a worker swung a shovel toward a caged dog’s head as the pup desperately tried to escape imprisonment.

Confusing laws allow dog farms to continue to exist in S. Korea, but this particular Icheon dog meat auction house is operating illegally, as there are no required waste treatment facilities on-site and the area in which it’s located is zoned for agriculture.

LFT partner Save Korean Dogs will be urging Icheon city officials to close down the auction house for these violations.

Unless it is shut down soon, the Icheon dog meat auction house could stand to profit from cruel and criminal exploitation, especially during the Bok Nal Dog Eating Days — where defenseless dogs are slaughtered and cooked as boshintang, or dog meat soup — which takes place on what are supposed to be the hottest days of the year.