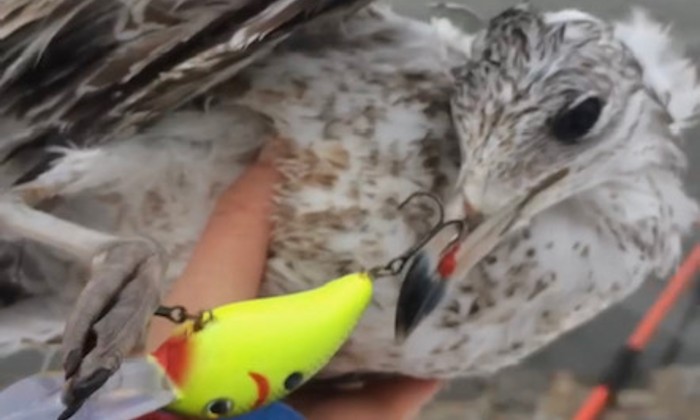 An innocent cormorant, his beak shackled shut by improperly discarded fishing twine, stared fiercely from brilliant blue eyes at the photographer documenting his sad plight at a New York City park in May.

That same week, an angler cast out a hooked line into the park’s lake as a swan family glided over the water a few feet away, according to a video posted by the Lights Out Coalition – an alliance of about 40 organizations dedicated to protecting New York wildlife.

A day later, the NYC Parks posted a video of a rehabilitated Canada goose joyfully flapping off to rejoin his mate in the lake at Prospect Park, having survived a vicious injury by a fishing hook.

Other birds were not so lucky. One hapless gull drowned to death after being hooked by a barb to a buoy, according to one photo sent to Lady Freethinker by a local bird rescuer, despite barbed hooks being strictly prohibited in the parks.

Injuries to precious wildlife — from getting limbs and beaks tangled in fishing line, to extreme suffering after getting embedded with abandoned barbs and hooks – are out of control, local bird advocates say.

Citizen rescuers can’t keep up with the endless numbers of wildlife in desperate need of rescue and emergency vet care due to the discarded debris, said nonprofit and Lights Out Coalition member NYCLASS, while a local bird rescuer took to social media to lament the sad situation.

“The hook and line injuries never end at Prospect Park,” the rescuer wrote on Twitter in May. “It is heart wrenching and exhausting to watch wildlife suffer. If there is no enforcement, there should be no fishing. Enough is enough.”

The Lights Out Coalition also agrees that fishing must be banned in NYC Parks to save countless wildlife from suffering.

“We are very concerned about all the injuries and deaths of birds who live in the local parks that are caused by people’s failure to properly dispose of fishing gear,” the Coalition said. “If we could get a ban, it would save thousands of birds.”

The Coalition also has received reports of dogs being injured by improperly discarded hooks as well.

Please keep our @NYCParks clean by properly disposing of fishing gear and prevent this from happening. pic.twitter.com/frOFwenwvz

In the tweet about the rehabilitated goose, so cruelly harmed and then separated from his mate, the NYC Parks advised people to “be responsible with your fishing line.” But the deadly problems for birds at NYC Parks from improperly discarded fishing gear have been ongoing for more than a decade, despite public education campaigns by both parks and wildlife nonprofits.

A NY Times article from 2011 detailed the same problems faced by today’s birds — ducks, shorebirds, and turtles tangled in line, injured by nibbling on bait left on hooks or swallowing the hooks, poisoned by lead sinkers, and young birds ensnared by twine taken into nests — and outlined similar victims: a baby swan pierced by a barbed fishing hook, a female mallard tangled in a lure, a double-breasted cormorant with a hook embedded in his leg.

These innocent animals don’t deserve to suffer excruciating injuries, deaths, and separations from their mates and families because people can’t be inconvenienced enough to properly discard their used fishing gear.

It’s time to take the only decisive action that will allow wild birds to swim with their families in peace.

Sign our petition urging the NYC Council and the Council’s Parks Committee to enact a ban on fishing in NYC parks and so stop the otherwise inevitable suffering of wild birds.