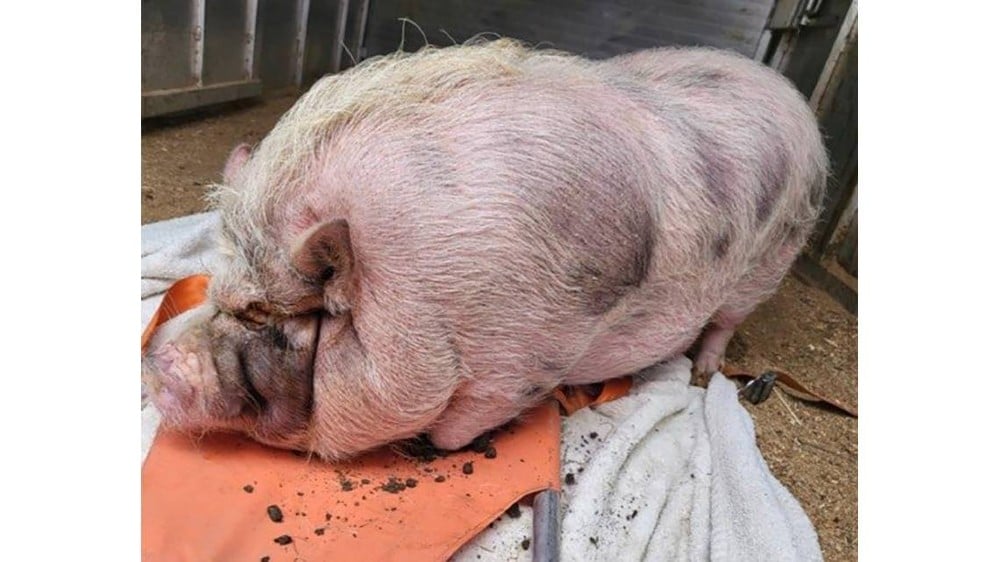 UPDATE (1/23/2023): Both defendants pleaded guilty to an amended charge of companion animal cruelty, a second degree misdemeanor. The other three charges then were dropped. Judge Patrick Cunning sentenced each defendant to 90 days in jail, with 60 days suspended — meaning they will each spend 30 days in jail — as well as a prohibition on owning animals for five years. Meanwhile, Oreo is recuperating at the Happy Trails Farm Animal Sanctuary, where she already has lost 63 pounds and can now walk on her own, according to news reports. Thank you so much to everyone who signed our petition on behalf of this sweet pig! —Lady Freethinker Staff

A sweet pig named Oreo suffered in a urine-saturated, “dungeon-like” basement — left without light, fresh air, or the ability to access water — in Campbell, Ohio, until her recent rescue.

Oreo’s owner, when contacted by a Campbell police officer who told her keeping the pig was against the city’s codes, reportedly said she moved Oreo to a nearby farm. But days later, the officer found out Oreo was still in the basement.

Officers and rescuers who executed a search warrant on the property found Oreo living in her own excrement,  in a room without any natural or artificial light and “an overpowering stench of urine and ammonia.” The innocent pig was lying on her side – so obese that she couldn’t support herself or get to her water bowl. Rescuers reported her hooves were severely overgrown, she appeared dehydrated, and her legs likely were arthritic, according to news reports.

While on scene, a man called and reportedly told officers he would kill them if they moved the pig, according to news reports.

Authorities charged Cortney Kline-Carnes and Shawn Kline with misdemeanor counts of keeping swine without a license, prohibitions against companion animals, and cruelty to animals. Kline-Carnes also is facing a count of obstructing official business, while Kline faces an additional count of aggravated menacing.

Kline-Carnes, who has pleaded not guilty to the charges, has claimed that Oreo was her emotional support animal and was treated well and like “family,” but has since agreed to voluntarily surrender her. Prosecutor Brian Macala told news that even had Kline-Carnes had the proper licenses and paperwork to keep Oreo as an emotional support animal, local regulations would have required proper, humane care.

“[Kline-Carnes] may have a feeling that she was deriving enjoyment or support… from that animal, but that was quite clearly an animal in distress,” Macala told Mahoning Matters.

The rescue where Oreo is recuperating said that she has started to learn how to walk outside again, but anticipates it will take months of recovery and weight loss for Oreo to be able to “be a pig” mentally and physically again.

This tragic case of brutal neglect must be treated with the severity it deserves. Pigs are highly intelligent and sensitive beings, and this sweet and defenseless animal did not deserve to suffer as she did.

Sign our petition urging Campbell Municipal Court prosecutors to hold the individual(s) responsible in this animal cruelty case accountable to the fullest extent of the law, including any needed intervention services and a maximum ban on owning or caring for animals in the future.