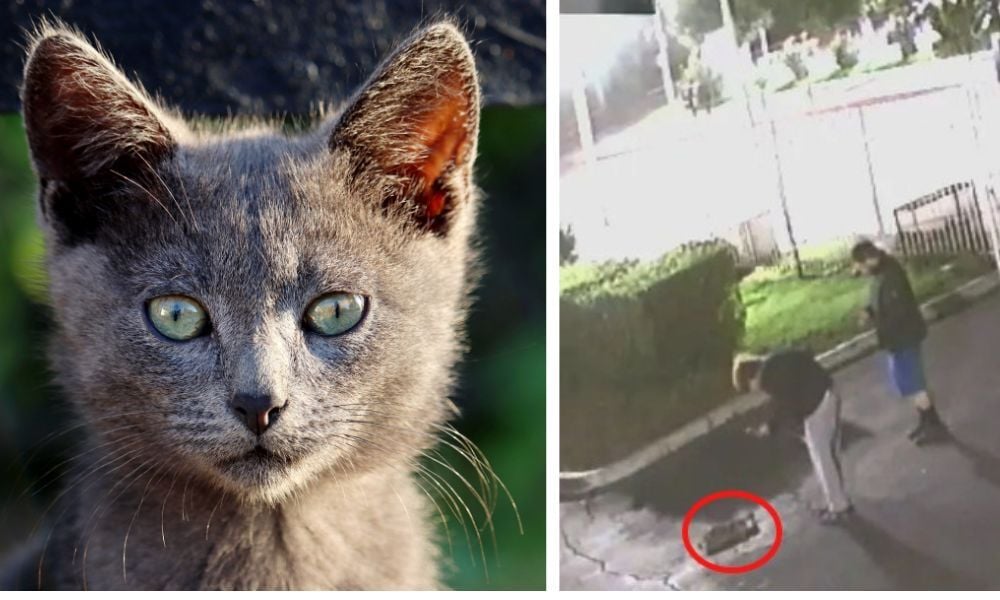 UPDATE (12/21/2022): Pomona police have arrested two individuals in connection to this crime but have not yet released their names, according to local news. We’ll keep checking back and will update this story when we have more information. — Lady Freethinker Staff

A defenseless stray cat was viciously shot, stabbed, mutilated and killed in a parking lot in Pomona, California, where a surveillance camera recorded the vile act of animal cruelty.

Scruffy, as workers at a nearby business called her, was ambushed by two men in a white car, NBC Los Angeles reported. The car’s passenger shot the stray cat with a pellet or BB gun, leaving the animal immobilized and helpless.

The two “psychopaths” — as an employee of the property’s business described them — jumped a fence into the parking lot and approached the dying cat, according to NBC. Surveillance video shows one of the perpetrators repeatedly stabbing Scruffy while the other ghoulishly photographed the gruesome act.

A nearby worker who helped feed the area’s stray cats had been preparing to adopt Scruffy, news reported.

“I would hang out with her in my breaks, my lunch after work,” Kamil Rapacz told NBC. “We were ready to adopt her. We were just waiting for our landlord to let us know.”

Whoever intentionally mutilated and killed this defenseless cat needs to be held fully accountable.

Sign our petition calling on Pomona police to take this case seriously by investigating thoroughly and forwarding any applicable animal cruelty charges on to a prosecutor, and for prosecutors to require any needed intervention services – including a psychological evaluation or anger management therapy — as well as a maximum ban on owning animals for those involved.

*Anyone with information on this crime should contact the Inland Valley Humane Society.