SIGN: Justice for Lions Starving to Death at Sudanese Zoo 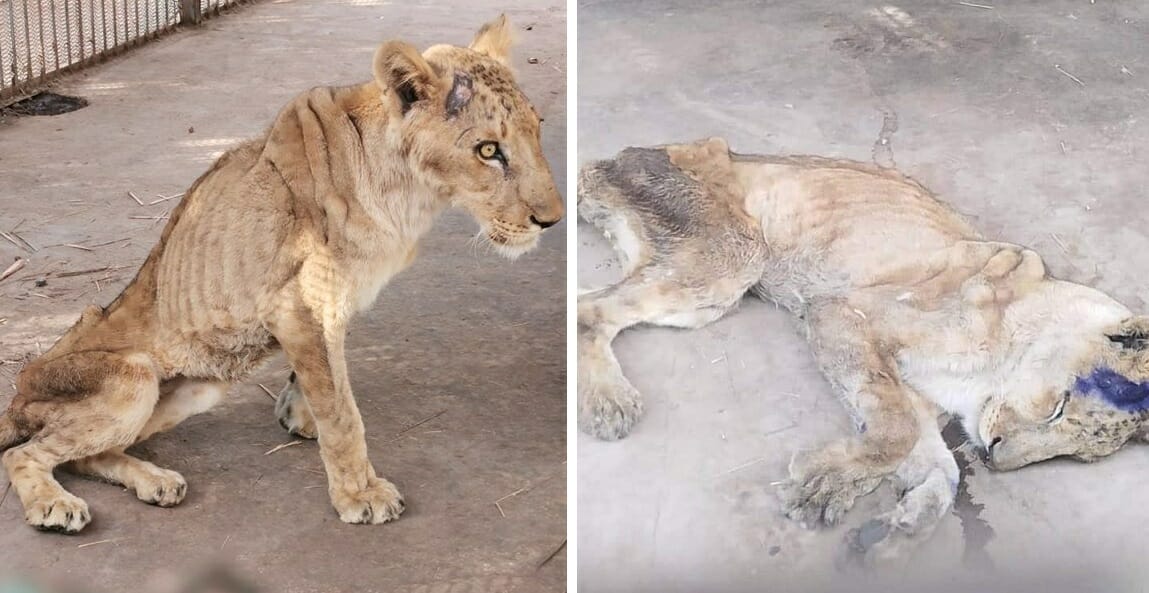 UPDATE (11/9/2021): Following news reports of the appalling conditions at the Al Quarashi Park in Khartoum, the Vienna-based animal welfare organization Four Paws International stepped up to conduct medical checks and provide needed medical care and food for the animals, according to AP News.

The nonprofit had no plans to transport the animals from the facility, but announced via a Tweet and as covered by Gulf News-Africa that they had started a rehydration treatment for the lioness Kandaka that involved an infusion of fluids, vitamins, and minerals.

We’ll continue to check for updates on this Khartoum-based zoo.

Emaciated lions, locked in cages with concrete floors that have no resemblance to their natural habitat, are sick and starving to death at a Sudanese animal park.

The malnourished lions’ hips and spines are nearly poking through their skin, and they look weak and lethargic, as Osman Salih’s Facebook post shows.

The park claims the wildlife police are directly responsible for the ongoing lack of sufficient food or medicine, as the park’s monthly income is not enough to feed one lion for one week.

“Food is not always available,” said Essamelddine Hajjar, a park manager, “so often we buy it from our own money to feed them.”

Tragically, one of the female lions died last Monday.

Animals forced to live in captivity are incapable of fending for themselves, making those holding them captive responsible for their wellbeing. Every day, innocent lions are needlessly wasting away. This is a life-or-death situation.

Please, sign this petition urging Sudan’s wildlife officials to find these lions the care they need before it’s too late.

Attempts to create a GoFundMe campaign have been blocked due to the United States’ sanctions on Sudan. In the meantime, Salih’s efforts have generated a rapidly growing online campaign. You can get involved by following the hashtag #SudanAnimalRescue.