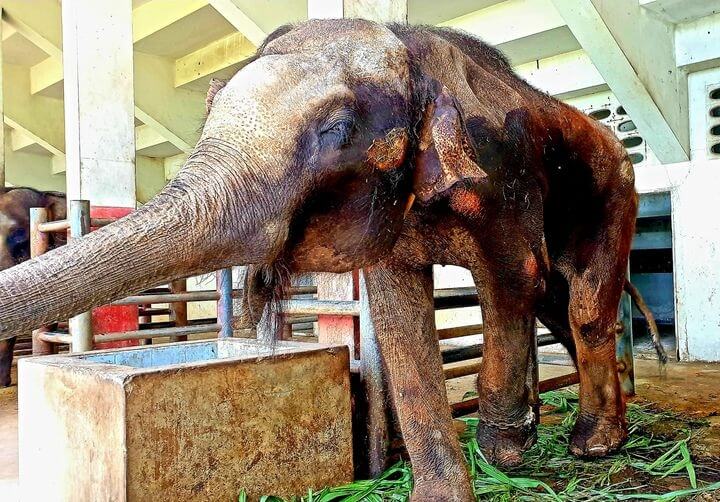 Intelligent elephants are being starved, chained, and hit with metal spikes and vicious hooks so they will give rides and perform tricks for tourists at the Samutprakarn Crocodile Farm and Zoo in Thailand, according to news reports.

Concerned visitors to the zoo reportedly offered to donate food but were refused entrance. They then posted photos of injured and seemingly malnourished elephants on social media and alerted wildlife and livestock officials, whose investigation found the zoo was in violation of the Cruelty Prevention and Animal Welfare Act, according to Coconuts Bangkok.

But shockingly, local authorities reportedly have decided not to pursue penalties or cruelty charges — instead telling the zoo to feed the elephants more grass and loosen the animals’ chains to reduce stress and injury, according to news reports.

The zoo has previously made the news for grossly underweight elephants being forced to perform tricks and also for handlers who reportedly stabbed elephants with spikes to force them to entertain tourists, kept animals chained in crowded and unsanitary conditions, and forced tigers, chimpanzees, and an orangutan to pose with tourists for the zoo’s profit.

Wild animals do not deserve to endure such extreme suffering and degradation for people’s “entertainment.”

Thailand must enforce its animal cruelty statutes, and these atrocious acts also must be treated with the severity they deserve.

Sign our petition urging Thailand authorities who oversee elephant welfare to thoroughly investigate conditions at this zoo, crack down with maximum penalties for violations, and retire these suffering animals to a reputable sanctuary where they will no longer be abused or exploited.