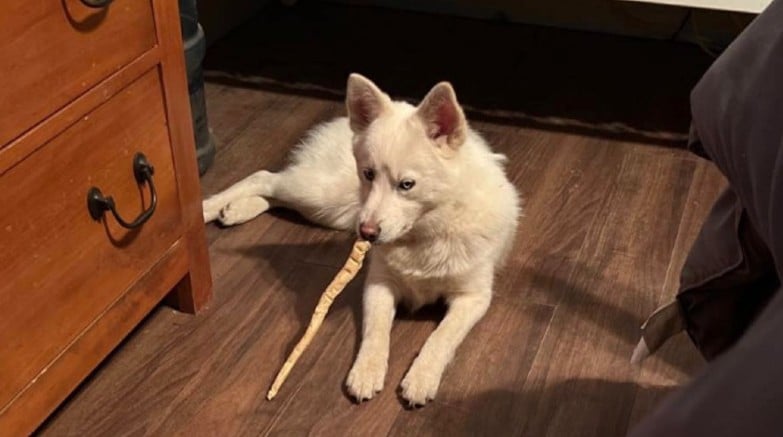 Scooby prior to transport. (Submitted photo)

UPDATE (11/28/2022): A Montgomery County grand jury has indicted Tiara Alsaid, who is currently out on bond pending her criminal court proceedings, according to The Houston Chronicle.  We’ll keep watching this case. — Lady Freethinker Staff

Scooby, a gorgeous white dog with warm blue eyes, entered the care of a pet transport carrier healthy, but later reportedly arrived at his destination dead and already decomposing in his crate.

He’s tragically just one of the canine victims now tied to the carrier, whom officers recently pulled over in a U-haul at a traffic stop in Montgomery, Texas, where they discovered a cargo hold full of stolen and injured dogs left without food or water and wallowing in their own urine and feces, according to news reports.

Four dogs languished in the cargo hold, including one who appeared malnourished and another who had exposed flesh on his back consistent with a chemical burn, according to the Montgomery County Sheriff’s deputy who arrived on scene.

Authorities arrested Tiara Alsaid, 26, on charges of animal cruelty, theft, and drug warrants from various counties, and Richard Anthony, 57, on unrelated marijuana charges after they also found drugs in the U-haul. Victims reportedly scammed by Alsaid’s “transport” company have since been identified in Texas, Florida, Tennessee and California, Sgt. Jason Smith told news.

One of those reported victims is Dyaisha Jordan, who told the Houston Press she’s still waiting to find out what happened to her shepherd Blackie.

“It is just a question that we have no closure for,” she said. “We still don’t have a clue as to whether he is even dead or alive.”

Defenseless animals don’t deserve to suffer and die at the hands of a scammer — especially one reportedly followed by a trail of official complaints with numerous law enforcement and federal agencies.

The individual(s) responsible for the death and suffering of these stolen dogs must be held fully accountable, with protections immediately and permanently enacted so they can never harm animals again.

Sign our petition urging Texas state prosecutors to treat this case with the severity it deserves, including ensuring the animal cruelty charges remain on the record, ordering significant restitution paid to an animal welfare related cause as well as the mourning guardians, and issuing a maximum ban on owning or possessing animals for the individual(s) involved.

Authorities have identified the guardians for three of the four dogs. Anyone who thinks the fourth dog could be their missing companion animal is encouraged to call Sgt. Smith at 936-538-3545.