SIGN: Justice for Dogs Locked in Cages and Abandoned By Side of Road

Home » Animals » SIGN: Justice for Dogs Locked in Cages and Abandoned By Side of RoadBy Joe Taglieri 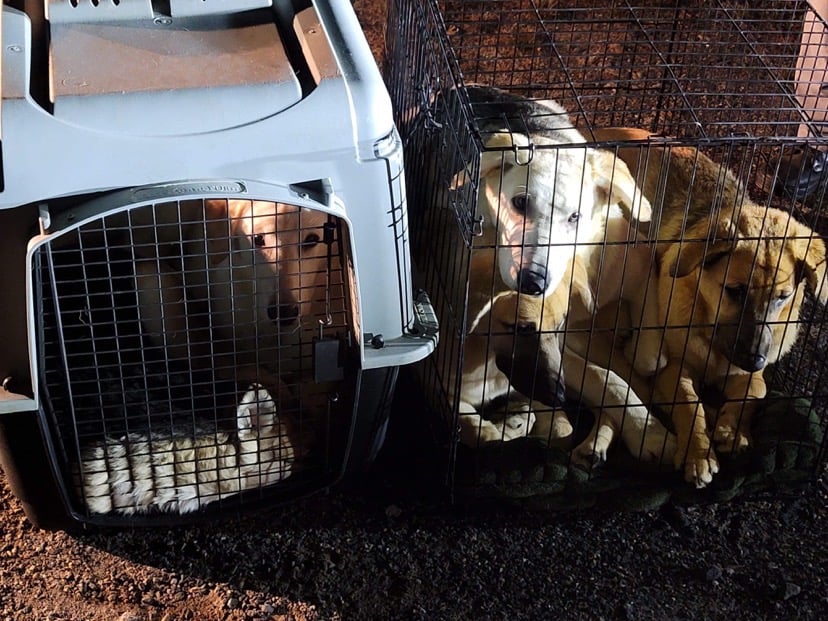 UPDATE (9/22/2022): Sadly, no one was connected to this crime and the case has been closed by local law enforcement. “We never developed any leads in this case and its status is officially inactive unless/until we do,” said Sgt. Jim Robinson with the Buncombe County Sheriff’s Office.  Robinson added the rabbit referenced in news reports was actually a dog. Happily, however, he added that the dogs were adopted out to new homes by the Asheville Humane Society. While we are disappointed no one was connected to this cruel act of abandonment, we’re grateful the dogs now have the chance to live the loving lives they deserve. We’ll keep doing all we can for animals. —Lady Freethinker Staff

Five dogs and a rabbit were crammed into two small carrier crates and abandoned by the side of a dark road for an unknown amount of time before officers in western North Carolina received a complaint and responded, according to the News & Observer.

One of the heartbreaking photos, posted by the Black Mountain Police Department,  shows three medium-sized dogs smashed inside a wire cage that left them completely exposed to the elements and also clearly was made to hold a single animal.

In another crime scene photo, a rabbit is squished near the metal grating on a plastic carrier crate, with the eyes of two large dogs peering out forlornly from behind in the tight space.

These innocent animals deserved much better than to be cruelly stuffed into overcrowded cages and left for dead on a dark roadside with no food or water. Police have not provided any information about the conditions of the animals or whether they will be ok, according to news.

Sign our petition urging the Buncombe County Sheriff’s Animal Control officers and Buncombe County District Attorney’s Office to thoroughly investigate this deplorable act of animal cruelty and exact justice for these abandoned animals to the fullest extent of the law.

Police are seeking the public’s help in identifying those responsible for this disgusting act of abandonment. Anyone with information may contact Buncombe County Animal Control officers at (828) 250-6670 or Sgt. Jim Robinson at [email protected]