SIGN: Justice for Dog Tied to Balloons and Left Floating in the Air for Viral Video

Home » Animals » SIGN: Justice for Dog Tied to Balloons and Left Floating in the Air for Viral VideoBy Holly Mills 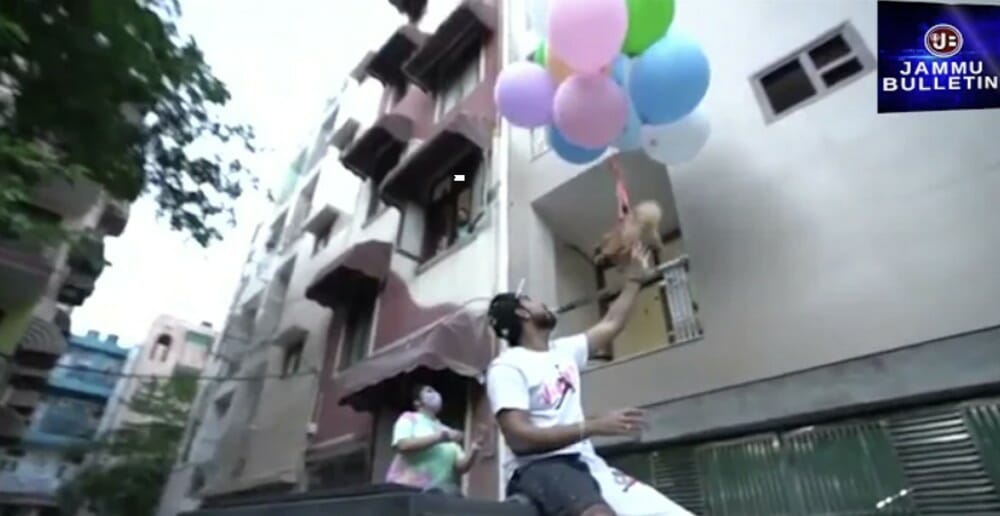 UPDATE (11/17/2021): Gaurav Sharma was detained from his home and sent to judicial custody after allegedly shooting an unrelated video inside the Nidhivan Raj, a religious place where recording is not allowed, according to NewsTrackLive. We’ll keep watching these cases.

In a viral video posted toYouTube, a helpless Pomeranian named Dollar is tied to several helium balloons lifts into the air, floating all the way to a second-story balcony before someone catches him, according to Newsweek.

On his way up in the now-deleted footage, the terrified dog collides into a balcony.

Although the dog’s ‘guardian’ said in an apology video that he took “all the safety measures” prior to the dog’s atrocious launch for page views, it’s easy to imagine the balloons popping or the person on the second-story balcony missing the dog on his way up, two terrifying scenarios that could’ve left Dollar badly injured or dead.

Viral acts on YouTube also are often copied by other people looking to gain subscribers– meaning that countless other dogs could be put in danger through this single act.

Gaurav Sharma — the Delhi, India-based YouTuber who posted the video, and who has over four million subscribers — said seeing similar disturbing stunts performed by other YouTubers inspired him to make the video. Sharma was arrested for animal cruelty and later released on bail.

Putting a dog’s life in danger is not worth YouTube views.

Sign this petition urging the Government of Rajasthan’s Department of Prosecution to prosecute to the fullest extent of the law the person responsible for risking Dollar’s life and potentially endangering other innocent dogs, helping to ensure that this type of animal abuse does not happen again in the future.

Sharma admitted to recording this video after the success of similar videos on YouTube. All animal cruelty must be removed from this platform. Sign Lady Freethinker’s petition to take animal abuse off of YouTube for good.