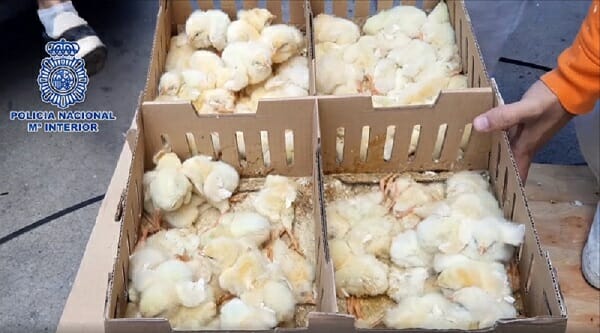 Found amongst their dead companions and forced to eat the decaying bodies just to survive, 23,000 baby chicks abandoned in transit suffered from starvation, thirst, and hypothermia at Spain’s Madrid Barajas airport, reported CNN.

The neglected chicks were left behind because the cardboard boxes they were shipped in got wet and broke, and they could no longer be transported, according to the Spanish National Police. The company that runs the airport contacted the shipping company, which neglected to do anything about the dying chicks.

Tragically, only about 3,000 chicks could be saved because of the abhorrent neglect they faced at such a young age, reported CBS.

Chicks are living, feeling creatures — not objects that can casually get left behind. Sign this petition urging the Spanish National Police to use all available resources to fully investigate this case and charge whoever is responsible for such blatant animal cruelty.