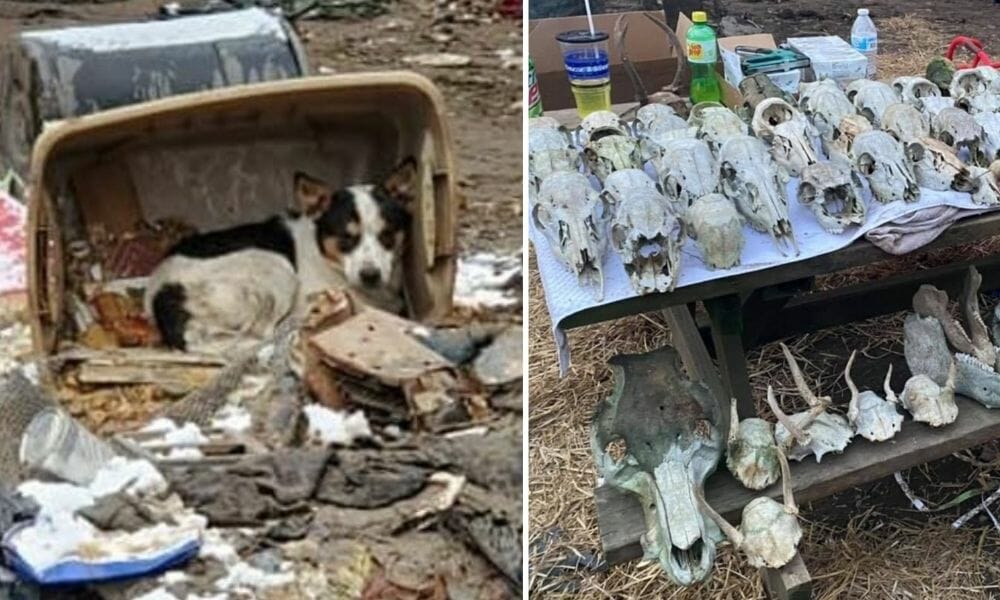 Images of "the boneyard" where deputies and rescuers recovered more than 200 dogs and puppies. Images courtesy Grundy County Sheriff's Office.

Deputies and animal rescuers recovered more than 200 living dogs and the corpses of hundreds of other animals from a filthy, garbage strewn residence in Grundy County, Tennessee, that has since been dubbed “the boneyard.”

In addition to hoarding the animals, the woman also was selling the puppies online, including three Blue Heeler pups for $300 each, an animal rescue volunteer told Fox 17-WZTV Nashville.

Animal rescuers had retrieved hoarded animals from unsanitary conditions at the woman’s home years before. But law enforcement hadn’t gotten involved because Tennessee has no state laws regulating or banning puppy mills.

The state’s Commercial Breeders Act expired in 2014, and legislative efforts to regulate and restrict harmful breeding practices have since died in committee.

The Grundy County woman has been charged with aggravated animal cruelty– the least serious felony charge that carries a maximum of one to six years in prison or a fine of up to $3,000. But under existing state laws, she didn’t violate any commercial pet breeder laws– since there aren’t any in the books.

Faced with the horrific deaths and needless suffering of the hundreds of innocent dogs harmed at the Grundy County home, and the lack of legislation to stop repeat events, Sen. Jon Lundberg (R) said it’s time to revisit strengthening puppy protections through legislation.

An unofficial poll taken by Fox Nashville showed that 78% of more than 200 respondents were in favor of adding laws to strengthen animal rights. Justice for these voiceless victims can’t wait.

Sign this petition urging Sen. Jon Lundberg to follow through with his statements to sponsor — and champion– a bill holding accountable any Tennesseans who harmfully and horrifically exploit puppies in inhumane puppy mills.