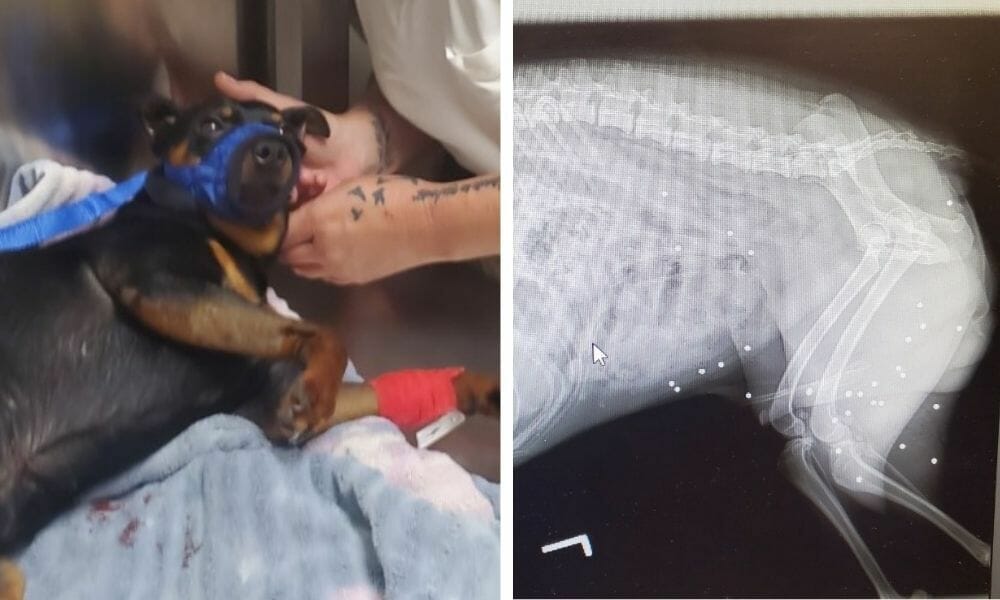 Lil Bit — a 10 pound, two-and-a-half-year old Miniature Pinscher — suffered hours of agony after being shot more than 30 times with pellets, which likely clipped his intestines and kidneys and led to his death, according to veterinary notes about a necropsy performed after the tiny dog was euthanized.

Lil Bit’s guardian, Shannon Jones, said she had taken the puppy out for leash training with a new harness so that he could go for walks in a nearby park with her disabled son. Jones said the dog slipped out of the harness, chased a cat into a nearby yard, and ended up getting repeatedly riddled with birdshot — metal pellets launched from a shotgun — after a person mistook the tiny animal for a coyote, according to Jones.

X-rays and veterinary records from an emergency clinic from the same day of the alleged incident show more than 30 pellets embedded in the dog’s lower body.

Although the initial diagnosis was positive — with a staff member hopeful of sending the dog home after overnight monitoring — additional notes in the veterinary records report that Lil Bit was not responding well to pain medications or staff efforts to maintain his body temperature.

Necropsy reports showed a “large amount of bloody free fluid” in his body, which would have been consistent with the pellets possibly clipping Lil Bit’s kidneys or intestines, according to the veterinary reports.

Shooting animals with pellets is an act of inexcusable cruelty. Whoever shot this tiny dog must be held accountable for his or her actions.

Sign our petition urging the Elmore County Sheriff’s Department and the Millbrook and Coosada police departments to thoroughly investigate this shooting that resulted in an innocent dog’s death and to forward any applicable animal cruelty charges to a prosecutor.