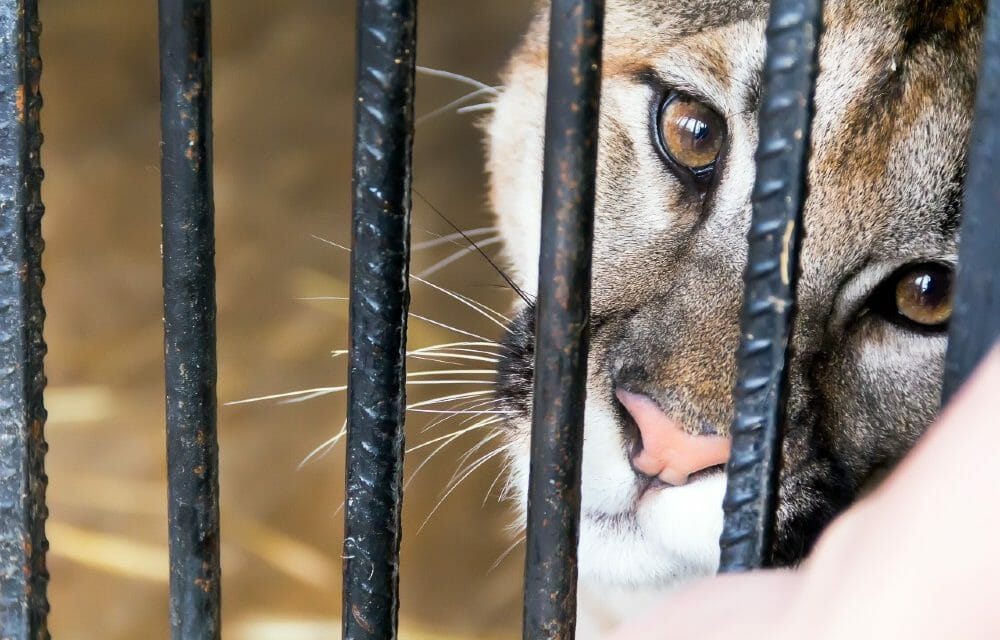 UPDATE (8/15/2022): The Royal Oak City Commission has enacted an ordinance that will prohibit residents from acquiring most exotic animals as “pets,” effective Aug. 18, according to the Royal Oak Tribune. We thank everyone who signed our petition for these animals! —Lady Freethinker Staff

Caracals, a type of wild cat with tufted ears and lanky bodies, are nocturnal, highly secretive, and mostly solitary while roaming their native rangelands in Africa and the Middle East.

But these elusive, wild felines are being legally kept as pets in Royal Oak, Mich., where one innocent animal escaped and – although she did not harm anyone – caused immediate fear in the surrounding neighborhood.

Experts rightly cautioned that caracals are wild animals and that their behaviors can be unpredictable – as can that of the other exotics currently allowed within city limits as “pets,” including alligators and crocodiles.

Wild animals do not deserve to be kept in cruel captivity in private homes, where their needs likely aren’t being met or understood by their “owners.”

Their presence in residential areas also continuously puts them in danger, as during any possible escapes, authorities are allowed to kill any animal that presents a possible danger to the human public.

Recognizing these givens, 20 states already have comprehensive bans on exotic pet ownership – and it is time for the city of Royal Oak to do the same.

Commissioners enacted a temporary moratorium last year following the escape of the caracal and are considering a permanent ban for the city on exotic pet ownership – which would include wild cats, poisonous or venomous animals, alligators, crocodiles, primates, wolves, and foxes, among others.

Wildlife rehabilitators and licensed veterinary professionals temporarily treating wildlife would be exempt from the proposed ordinance. People who already own exotics also would be exempt, but they would not be allowed to obtain any new exotic animals.

The ordinance, as proposed, allows for penalties of up to $500 or 90 days in jail, but a clause also allows for any animals kept in violation to be removed and euthanized – and that latter part must not happen. Every effort must be made to safely relocate innocent animals who arrive in Royal Oak through no fault of their own.

Sign our petition urging the Royal Oak City Commission to enact a permanent ban on exotic “pet” ownership, with an ordinance that emphasizes safe relocation for any confiscated animals.