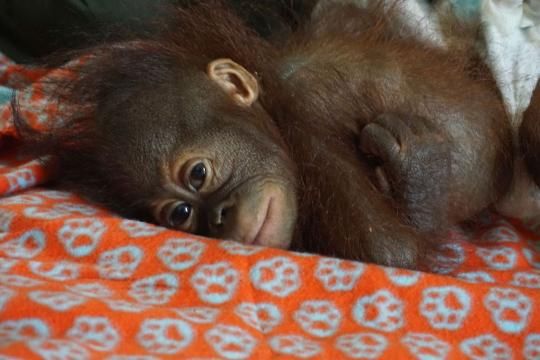 A new orangutan orphanage has opened in Borneo! It is called the Four Paws Orangutan Forest School, run by the organization Four Paws international along with renowned primatologist Dr. Signe Preuschoft.

The 247-acre forest school is home to orangutan orphans as young as just a few months old. They are being looked after by a team of caretakers and veterinarians, with the main goal of preparing the orphans for release back into the rainforest so they can thrive on their own.

“The goal of the project is to train these orangutans so that in a few years, when they reach the appropriate age, they will be able to return to a natural forest and live there completely free and independent,” explains Dr. Preuschoft. These orangutans were orphaned when their mothers were killed as a result of human conflict due to palm oil, tropical timber, and the coal industries.

The young orangutans start out each day by traveling from their dorms to the Forest School in a “school bus”. Once there, they learn from their human surrogate mothers the skills that their birth mothers would normally teach them. The most crucial life skills include climbing, foraging, and building a sleeping nest. Successfully rehabilitated and re-introduced orangutans will contribute to the survival of their species in the wild. Today, Bornean orangutans are classified as critically endangered.

Only about 50,000 Bornean orangutans are left in the wild; this is a population decline of 80% since 1950. At the same time, approximately three quarters of Borneo’s rainforest have been converted for human purposes, mainly into industrial agriculture or coal mining areas. This is the main reason for orangutan-human conflict, with the danger of being killed as crop raiders and pests. Defenseless baby orphans are taken from their dying mothers and illegally kept or sold as pets.

Most confiscated orangutans are orphans younger than 5 years old. Since they are still infants, they are too young to be released and cannot live independently; they still need surrogate mothers and nurturing before they can fend for themselves in the wild. Depending on their age and medical condition, the orphans start their education in the Forest School at different levels: kindergarten, forest school, or orangutan academy. Eventually, every orangutan will pass through the successive training steps according to their individual abilities.

Sadly, orangutans aren’t the only ones struggling to make it in the shrinking rainforest. Many other species such as elephants, rhinoceros, leopards, sun bears, and birds are being driven to extinction because of palm oil, tropical timber, and the coal industries.