An inspirational documentary about vegan ultra-marathon runner and passionate animal advocate Fiona Oakes is slated for release on Vimeo on October 11.

The documentary, entitled Running For Good, follows Fiona as she attempts to set a new world record for endurance running while competing in the infamously brutal Marathon Des Sables (MDS).

This 250-kilometer race (the length of six marathons) is known as the ‘toughest footrace on earth.’ For six days, participants pound through the unforgiving terrain and relentless heat of the Sahara Desert, including ascending and descending no less than three mountains.

This is by no means the first ultra-marathon Fiona has taken on; she has the impressive title of being the fastest woman on Earth to run a marathon on every continent and holds three marathon world records and five course records.

What makes her story even more impressive is that Fiona lost a kneecap to a serious medical condition as a teenager, leaving doctors unsure if she would ever walk normally again. After more than 17 knee surgeries, culminating in the removal of her kneecap, Fiona underwent excruciating rehab therapy and, astoundingly, continued to push her limits year after year.

“Fiona is a truly remarkable athlete and human being,” said Elisabet Barnes, 2-time winner of the MDS. “She has defied all odds to become a world record-breaking runner despite a horrific injury. Her sense of purpose is so strong that nothing can stop her. Yet at the same time, she is one of the most humble and selfless people I have met.”

Fiona Oakes is indeed a remarkable woman. When she’s not pushing the limits of her physical capabilities, she manages the Tower Hill Stables Animal Sanctuary, which cares for more than 450 animals. 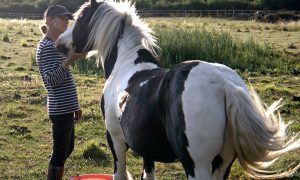 It is this passion for animals that is Fiona’s driving force. Her outstanding physical efforts raise awareness for animals and a vegan lifestyle, as well as funds to keep the sanctuary running.

Running For Good is directed by Keegan Kuhn, who is famous for documentaries What The Health and Cowspiracy. The film is narrated by ultra-athlete and author Rich Roll and includes truly inspirational footage of Fiona pushing through intense physical and mental challenges in locations such as the North Pole and Antarctica.

“I was deeply moved by this awe-inspiring story of how a woman has overcome a disability that would put most people in a wheelchair, to become a world record-breaking ultra-marathon runner, fueled by a plant-based diet,” said John Robbins, best-selling author.

Running For Good is now available for public screening events and debuts to the public October 11, 2018, on Vimeo. To download the film, visit RunningForGoodFilm.com.