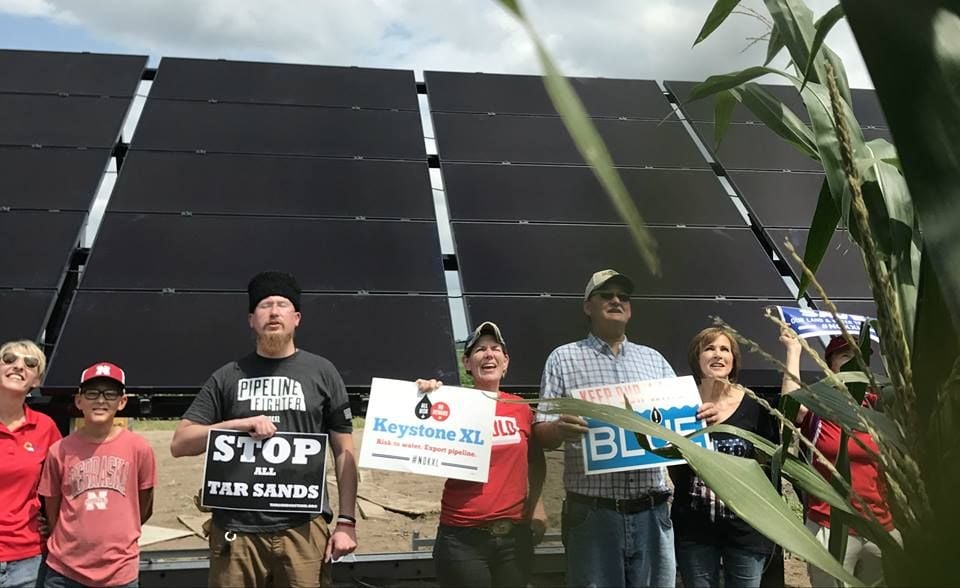 By November, the fate of the final phase of the Keystone XL Pipeline will be decided. In a stroke of defiant genius — an effort to thwart construction and a symbol of the renewable energy they want to create — activists and landowners are building solar panels directly on the path of the proposed pipeline.

The Solar XL project, a coalition of Bold Nebraska, Indigenous Environmental Network, 350.org, CREDO, Oil Change International and others, has raised over $40,000 for its campaign to build clean energy.

Nebraskan farmer Jim Carlson was among the first to install solar panels on his property.

“I am vehemently opposed to the the Keystone XL pipeline mainly because of the properties of the contents of the tar sands oil it will carry…it can kill. We must be focused on clean, renewable energy and America can get along just fine without this foul concoction they call bitumen that TransCanada wants to pipe across our precious soil and water,” said Carlson.

TransCanada has faced many obstacles as it fails to buy out landowners for the proposed pipeline route. Not only are landowners, often farmers, rejecting TransCanada’s offers of close to $300,000 for valuable land, but they have partnered with with Solar XL project instead. It’s worth noting that TransCanada is a company valued at over $40 billion. So $300,000 is nothing for the likely loss and damage of your home, sacred land, farmland, your neighbor’s land, an animal’s habitat, or drinking water that spans multiple states.

Come August, Nebraska’s public service commission will hold a final hearing on whether or not construction will continue through the state. There will either be construction and pipelines filled with dirty oil running from Alberta through Nebraska — polluting indigenous land, threatening delicate ecosystems and the main underground freshwater source for drinking water and irrigation, the Ogallala Aquifer — or resistance and common sense will prevail and TransCanada will bow out or be denied a construction permit.

Under eminent domain, local and federal government can take or condemn private land for public good, such as bridges and freeways, and must offer just compensation. But over time oil companies have in an unseemly manner been granted the ability to use the power of eminent domain by state and federal regulatory agencies, such as the Federal Energy Regulatory Commission (FERC). They’ve been bullying people off of their land when they don’t take the buyout, as in the case of Nebraska, to build pipelines.

It’s a far cry from eminent domain’s “public good” when oil drilling and spills are known to devastate the environment and our natural resources.  The reality is that oil companies are abusing this for private good: their own.

If by November TransCanada is given eminent domain and decides to proceed with construction, there will definitely be some sort of showdown — and most likely a court battle — over this decision. But it looks like the resistance, activism, and clean energy might win the good fight without that. TransCanada may not go ahead if there isn’t commercial support to make the project valuable. What started as a good investment ten years ago is now something best left untapped.