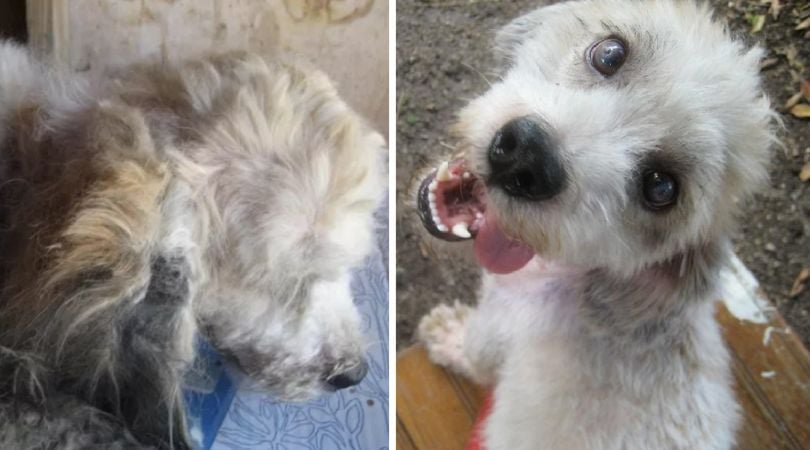 The motionless heap on the table bore no resemblance to a dog – it looked to be no more than a filthy bundle of horribly matted hair, leaves, debris and foul-smelling excrement.  There was an ugly wound all around his neck from a deeply embedded collar, which had been twisted even tighter with a stout length of thick wire, so that it had very nearly pierced his windpipe. And to complete the picture, there were three large puncture wounds in his chest, all oozing with maggots.

I wondered that they had not put him to sleep on arrival, but the girl who had found him and brought him in had begged. I set to work to find a place on his body where I could begin to cut the mats away, and resigned myself to many hours of work. To my surprise, when I succeeded, after a good while, in cutting away a square inch or two of matted growth and gently rubbed the skin beneath, the head managed to lift itself just a little, two eyes peered at me from the depths of the morass, and he feebly licked my arm!  That settled it, and from that moment he was my number one priority.

We went slowly, as I knew every touch caused him pain, the mats pulling the hair in all directions. Over the next few days I got blisters and calluses from cutting and cutting, but when I got the section down his spine free and ran my hand down the fuzz that was left, he gave a great shiver and a sigh, as if to say “That’s it, keep going, please.”  So I kept going.

The trickiest parts were going to be around his neck and legs, which had solidified masses of who-knew-what, hard as rock, seemingly glued to his skin. There was nowhere I could get the scissors in to make a start, and eventually I went back to basics and used a razor blade to slice down the middle of the mass of debris and open it up. This partially released it, then another slice released a bit more, and so on, till I could finally get underneath and snip away at it.  When I eventually removed this heavy weight from his front leg, with him sitting patiently on my lap, he managed to find the part of my finger which had the blister, and he licked it in thanks. The same happened with all four feet, and each time I felt like I had achieved a small victory.

I decided to call him Job, because of all he had been through, but it soon turned to Jovi.  I had noticed what long ears he had, but not paid much attention till I was approaching his neck — but to my horror, I now saw that what was making them look so long was yet more of the congealed matts, hanging off him like grotesque giant earrings.  Jovi was the perfect little patient, and stayed very still through all my tentative pulling and snipping and cutting, and with the weight off his ears he was at last beginning to look like a dog. He now trusted me to deal with the sensitive area around the wound, which was still very raw, although slowly beginning to heal up, and I was able to trim away any stray hair that was getting in the way.

Soon the day came when I felt I could safely say that all the mats were gone, and Jovi was beginning to come back to life.  Both of his eyes had protruding growths on the cornea, but they seemed not to bother him, and he was now walking around without bumping into things, and even finding his voice. Occasionally a tentative woof would escape him, frightening both of us for the moment, and as we went along, the woofing became more frequent, till he found he was quite comfortable with it and one day proudly let out a full-blown bark.

Then there was cuddle time. The old cupboard, set on its side, which I used as a bench, was the cuddle area, and Jovi had an endearing habit.  He would run up to it, but instead of jumping on, he would spring up vertically, then grab at the sides and scramble ungracefully on to the top. Sometimes it worked and sometimes it didn’t, and it was so funny to watch him spring into the air like a Jack-in-the-box, miss the bench altogether, and land back where he had been.  But once I sat down he would wriggle right up into my lap and stay for as long as I would let him.

Time was passing, his fur was growing back. He was getting very playful and looking positively handsome – all healed and ready to go – but the girl didn’t come back.  I was terrified he would get adopted by someone who wouldn’t appreciate what he had been through and would neglect him, but along came a lovely couple with 2 small sons, whom I thought had been sent from heaven.

They wanted to know all about him, and were really excited about taking him home to make friends with their other house-pet – a rabbit. It was just a question of having his surgery done. Then without warning the world turned upside down.  At the very eleventh hour the original girl appeared with her money. It turned out she had made an arrangement with the senior vet that hadn’t filtered down to the workers on the ground who do the adoptions. The family were devastated, but there was nothing they could do.  I, too, felt powerless and miserable, and promised I would look out for another ‘special’ dog like Jovi. It didn’t really help, but it was all I could offer.

Saying goodbye to him was a wrench.  We had been through so much together, but I was glad that he wouldn’t have to spend another day in a hateful cage, and I heard later that he was having a glorious time with the girl’s other two females.