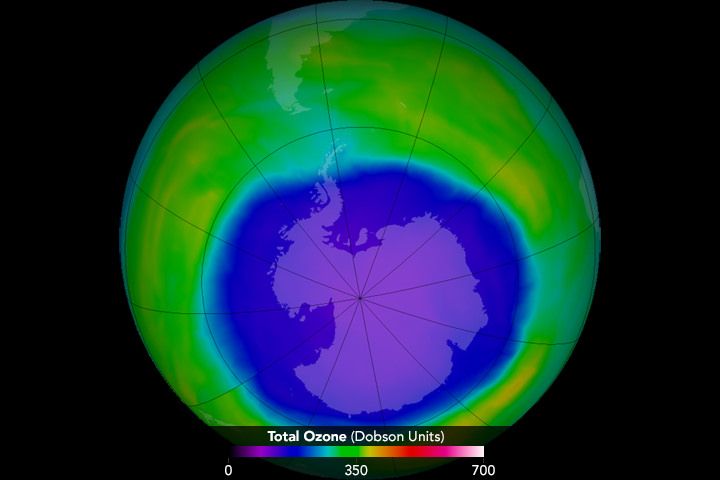 NASA satellites and NOAA ground-and balloon-based measurements recently showed the least amount of ozone depletion above Antarctica during the peak of the ozone depletion cycle since 1988.

The ozone is a thin layer of atmosphere that absorbs radiation from the sun. We need some of this radiation for life to exist on Earth, but too much causes skin cancer and even kills plants — potentially annihilating the food chain and destroying us all.

That’s why it was so disconcerting when a hole in this protective layer was discovered in Antarctica in 1985.

After discovering the hole, scientists determined that it was the result of chlorofluorocarbons used in air-conditioning, refrigeration and aerosol-spray propellants. To address the problem, in 1987 countries came together to sign the Montreal Protocol to phase out the industrial production of chlorofluorocarbons.

This move was a massive achievement for the environment and a case study in how countries can come together for the sake of the planet. U.N. scientists have credited the Montreal Protocol and the phasing out of these chemicals for the ozone’s gradual recovery.

Some are celebrating the size of the hole this year and attributing it to steps humans have taken to limit the release of chlorofluorocarbons (CFCs). But according to scientists at NOAA and NASA, this year’s especially small hole is due to natural variability and not a signal of rapid healing.

“Weather conditions over Antarctica were a bit weaker and led to warmer temperatures, which slowed down ozone loss,” said Paul A. Newman, chief Earth scientist at NASA’s Goddard Space Flight Center in Maryland. “It’s like hurricanes. Some years there are fewer hurricanes that come onshore . . . this is a year in which the weather conditions led to better ozone [formation].”