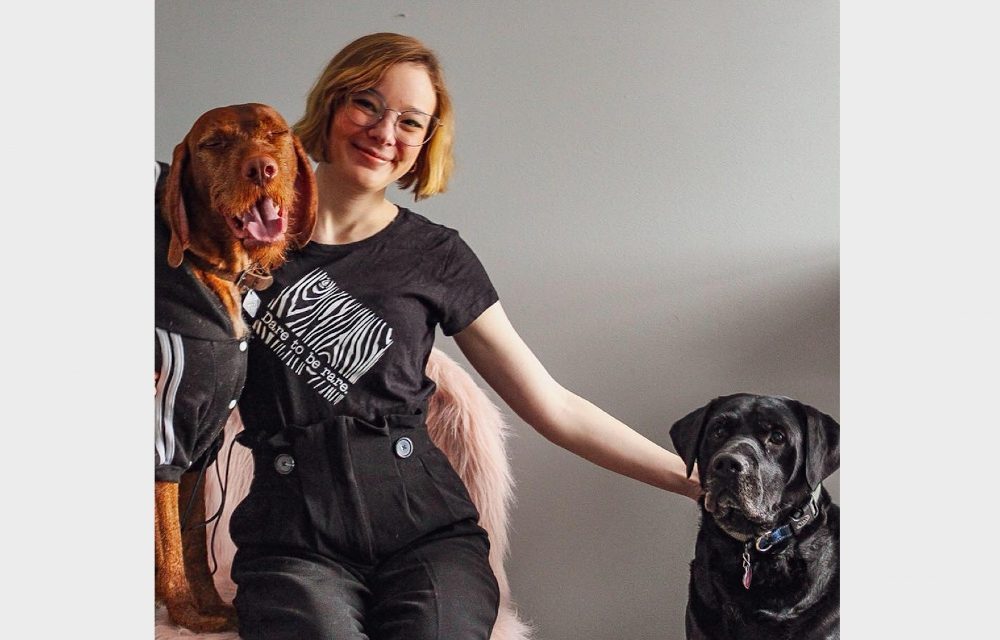 An inspirational advocate for people with disabilities, who has several rare and chronic conditions herself, hails her service dog as the only reason she is still alive.

Every day, a faithful service dog named Piper helps 25-year-old Cienna Ditri “with more things than I can count,” she told Newsweek.

Ditri suffers from hypokalemic periodic paralysis (HPP), a rare disease that causes episodes of extreme muscle weakness. Flare-ups cause Ditri to temporarily lose the ability to move the muscles in her arms and legs. The muscle weakness or paralysis can last from a few hours to whole days.

Piper proves an indispensable companion during those times, she told Newsweek.

“He helps me a lot with closing doors behind me, picking up things I drop on the floor, or grabbing water bottles for me, all normal things that service dogs do, like push the little accessibility buttons for the doors,” she said. “But Piper is a medical alert service dog too, so he does a lot of alerts to let me know before things happen.”

Avoiding triggers such as cold temperatures or too much carbohydrate-rich food is crucial for keeping periodic paralysis in check. Piper is specially trained to smell medical changes, Ditri explained. Piper alerts Ditri when her blood sugar is low or when she is about to pass out, and he also alerts her when she’s having allergic reactions.

The most important of Piper’s skills is alerting Cienna when she is not breathing as a result of another of her medical ailments.

In addition to HPP, Ditri also was diagnosed with narcolepsy and sleep apnea caused by congenital central hypoventilation syndrome, according to her bio on the website of Project Sleep, a sleep health nonprofit of which she is a board member.

Piper makes a star-studded appearance in that bio as well, described by Ditri as the dog “who has saved her life more times than she can count.”

But their life together — five years and counting — is not just about the life-saving services Piper provides to Ditri. She also makes sure that he gets time to enjoy just being a dog, including taking him boating and ensuring lots of snuggles.

“He loves it when I roll really fast in my wheelchair or when we’re at the ocean like jumping off our boat,” she told Newsweek. “He loves doing all those things, but he also just loves snuggling in bed. He’s really good with any type of day you want to have, he’s the ideal dog!”

Ditri also lives with a now retired service dog, Opie, who helped her for years and remains a steadfast pal.