As the devastating war on Ukraine continues into its third month, amidst the wreckage and rubble are new stories emerging of continued, daring animal rescues by people willing to risk everything to stop the suffering of even the smallest souls.

A cat rescued through a community effort from the seventh floor of a bombed building, two cows who walked more than 60 miles to safety with their guardian who refused to evacuate without them, disabled dogs in wheelchairs helped out of a war zone by a caring woman and her husband, and more than 200 abandoned animals rescued and reunited with their guardians or adopted by a Ukrainian actor are just some of these heart warming stories.

Comments about these acts of kindness and heroism posted on social media affirm that especially in times of war and hardship, people need to remember and celebrate the good in humanity.

We hope you are as inspired and uplifted by these stories as we are!

Saving Shafa the Cat from a Bombed High-Rise Near Kyiv

A 10-year-old cat huddled for more than two months on the seventh floor of a bombed high-rise in Borodyanka, near Kyiv, before local animal lover Eugene Kibets learned of the cat’s plight, according to the Catingdon Post.

Kibets, who has more than 3,000 followers on social media, posted about the situation and enlisted the help of caring friends and also nearby emergency services, who brought in a fire engine for the rescue.

The cat, who rescuers say desperately needed food and water but otherwise was uninjured, recovered at an animal hospital.

The cat’s miraculous survival led to a new name, Shafa, which means “cupboard” or “cabinet” in Ukrainian, and is a reference to photos of bombed buildings with unscathed cabinets clinging to their walls.

Following the rescue, Kibets posted a photo of himself holding Shafa along with a caption, translated from Ukrainian, that read simply, “I am so happy,” according to the Daily Mail.

“When we look at Shafa’s face, we think that if she didn’t get stuck in that house, she would have personally destroyed the entire army of occupiers,” Kibets told a reporter.

The Guardian Who Wouldn’t Leave His Cows Behind 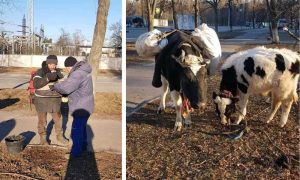 When Irpen, a city next to war-torn Kyiv, started evacuations, Andriy Mikhailov had a chance to leave.

But the evacuation vehicle wouldn’t have been able to accommodate his two beloved cattle, Martha and Troika, so Mikhailov decided to stay behind, according to The West Observer.

On the ensuing journey by foot to the Zhytomyr Region – a distance of more than 100 km, or 62 miles – the trio passed 15 villages and had to transverse the dangerous Zhytomyr highway.

But caring villagers, who learned about the trek via social media, stepped up to help along the way, staying on the outlook for the Mikhailov and his black-and-white companions and offering food and housing. While Mikhailov told news that he took what he needed, he also chose to sleep outside with his cows.

Thankfully, they made it safely to Mikhailov’s relatives, who welcomed him with open arms. As for his actions, Mikhailov told news reports he doesn’t find himself particularly heroic.

“It’s just as they say, it’s my job, my responsibility,” he said.

The photo of an unknown woman holding multiple leashes and surrounded by dogs, some of them in wheelchairs, went viral.

News has since identified her as Nasta Tykhoy, a Ukrainian whose family ran an animal shelter for years prior to the Russian invasion, when they had at least 19 dogs within their care.

With her husband, Arthur Lee, and the help of the Ukrainian Territorial Defense Forces, Tykhoy successfully evacuated those dogs – as well as five cats, a chameleon, turtle, hamster, and spider – out of Irpin when shelling started.

When asked why she evacuated animals with special needs, Tykhoy said the animals had suffered enough.

“What is the difference, sick or healthy?” she told The Economic Times. “Their lives are no less valuable. These invalids have suffered very much at the hands of man.” 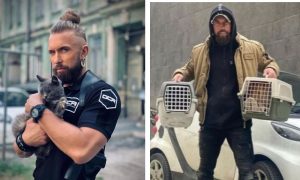 Ukrainian actor Alexei Surovtsev, made famous by his appearance in Ukraine’s version of Dancing With The Stars, found a new calling after a local asked him to help rescue a cat locked in a car for four days after the shelling started.

The experience so touched Surovtsev that he made it a mission to save as many animals as he could. He’s spent days driving around, looking for cats and dogs in need of help, who he rescues and transfers to a veterinary clinic for treatment.

Social media has helped him reunite several lost companion animals with their former guardians, while he makes sure that those whose families can’t be found remain at his house or at a local clinic while waiting to be re-homed outside of the country.

”Yes, it’s dangerous!” Surovtsev posted on social media. “Yes, it’s hard! Yes, scary! But when you see these frightened, devoted eyes, you realize that it is not in vain.”