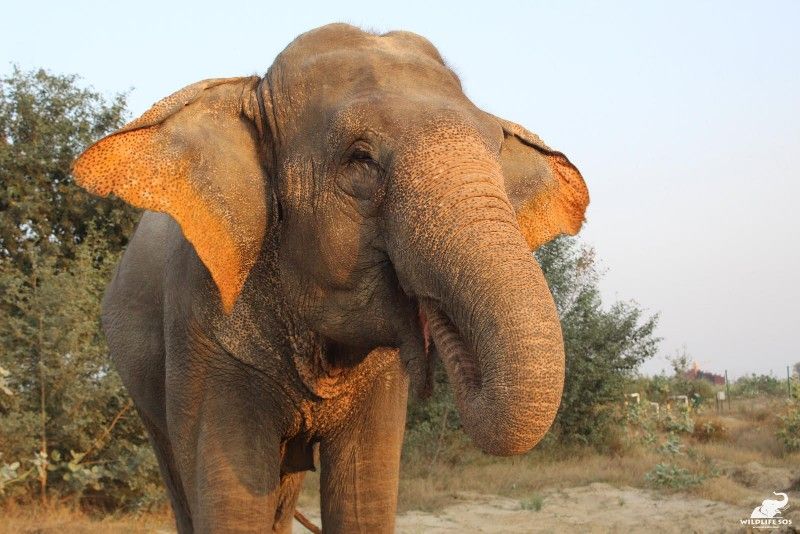 A wonderful new update from WildlifeSOS as one of their elephants just celebrated her one year rescue anniversary!

This precious gal is named Priyanka, and she is a former street begging elephant rescued from the most dire conditions. This sweet soul was forced to walk the hot tarred streets of India for over 40 years, used to “beg” to make money for her abusive owners. She constantly had a heavy saddle strapped to her back, so that she was always ready to give rides to anyone who would pay. Her cruel owner would also rent her out for weddings, processions, and parades — all of which are tremendously stressful for sensitive elephants.

When WildlifeSOS learned of Priyanka’s sad plight, they immediately began the process securing her rescue. While trying to get all of the legal documents in place it was revealed that this elephant was in fact owned illegally, and the people exploiting her did not even have a certificate of ownership.

When WildlifeSOS found this out, they knew there was nothing more standing in the way of sweet Priyanka and freedom. She was finally confiscated and taken in a special elephant ambulance to the Elephant Conservation and Care Center (ECCC). The entire journey was 300 kilometers (185 miles) as they drove all night to the sanctuary. 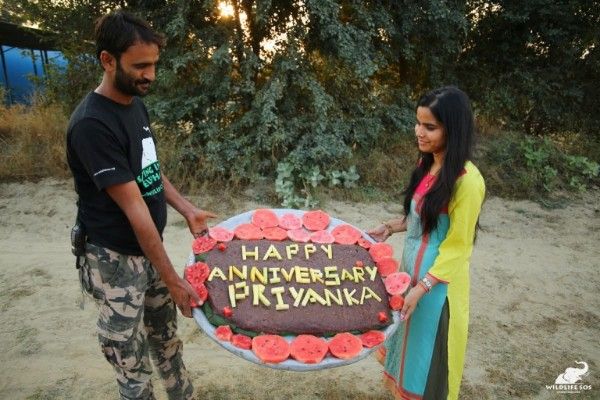 Ever since this darling elephant’s arrival at the ECCC, her life is infinitely better. Priyanka’s curious nature has taken her to all kinds of new experiences at the sanctuary: meeting other elephants, eating new fruits, and discovering new and interesting places on her walks out in the open fields.

Priyanka’s favorite pastime is playing in the pool inside her enclosure. She is a water-loving elephant and spends hours submerged or playing with her favorite toys. She also loves taking a dip in the river that runs on the grounds of the sanctuary, and refuses to come out until she’s ready.

Priyanka’s health has also been improving in her time at the ECCC. Tragically due to improper nutrition during her younger years, her hind legs are physically deformed and twist inward, indicating improper development. Unfortunately, this condition is chronic and incurable; but the dedicated team of vets at the sanctuary do everything they can to prevent it from worsening.

Priyanka is given regular pedicures to prevent her toenails and cuticles from overgrowing. She also follows a strict exercise routine to keep her from gaining weight, to try to prevent putting any more pressure on her hind legs. 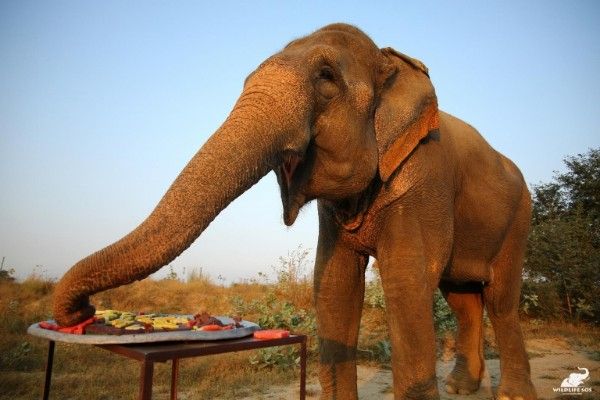 On the one-year anniversary of her rescue, the WildlifeSOS team had a special surprise in mind for Priyanka. They spent the day preparing her a special cake using protein-rich porridge layered with banana leaves and Priyanka’s favorite: watermelon! To top it off, the team chopped up and arranged pumpkin chunks to spell out, “Happy Anniversary Priyanka.”

On the way back from her usual evening stroll, the beautiful darling was taken aback by the colorful cake directly in her pathway. She carefully inspected it with her trunk to make sure that it was not something alien. Once she realized that these were all of her favorite scents and smells, she gobbled up the cake in minutes!

We are so glad that dear Priyanka was rescued from begging on the streets and is now enjoying her new life with friends and yummy foods. Happy anniversary sweetheart — we wish you many more!