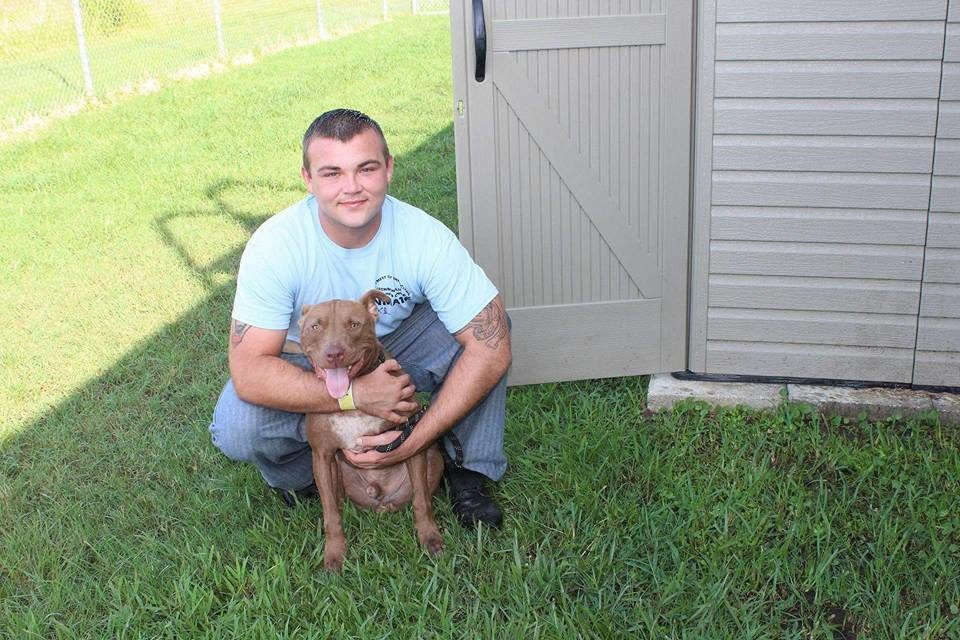 Thousands of animals are rescued from deplorable, abusive situations every year in the United States. They are often found emaciated, injured, and stricken with fear – unwilling to trust humans.

Fortunately, that wasn’t the case with Remo. Although emaciated and injured, the mixed-breed dog was eager to give his rescuer, Putnam County Animal Officer Kathy Tillman, a kiss as soon as she released him from the small metal box he was found stuffed inside in Palatka, Florida.

Things were looking bleak for Remo when Tillman took him to a local animal shelter only to be informed it was at capacity. Remo would have likely been euthanized had Tillman left him there. Instead, she called around and talked with Jen Deane, founder and president of Pit Sisters, who immediately authorized for Remo to be taken care of through their organization.

The well-mannered and loving pup entered the TAILS (Teaching Animals and Inmates Life Skills) program through the James I. Montgomery Correctional Center (MCC) in Jacksonville, Florida. Along with his inmate trainer, Howard Culpepper, Remo began training in 1.5 hour increments so he would have time to accustom to the new environment and people. Remo is one of only five dogs in three years to earn his “Ph.D.” in behavior. He has gained 30 pounds since he was rescued and many of his physical injuries have healed.

Culpepper and Remo grew together. Culpepper had avoided dogs since one bit him when he was 13 years old, but interacting with – and caring for – Remo has changed things.

Irre has been involved in the TAILS program for three years and said she will never forget Remo. “This case is the one that amazes me,” she said.

Remo is ready for adoption and his rescuers are hoping he finds a forever family soon that treats him “like a king.”