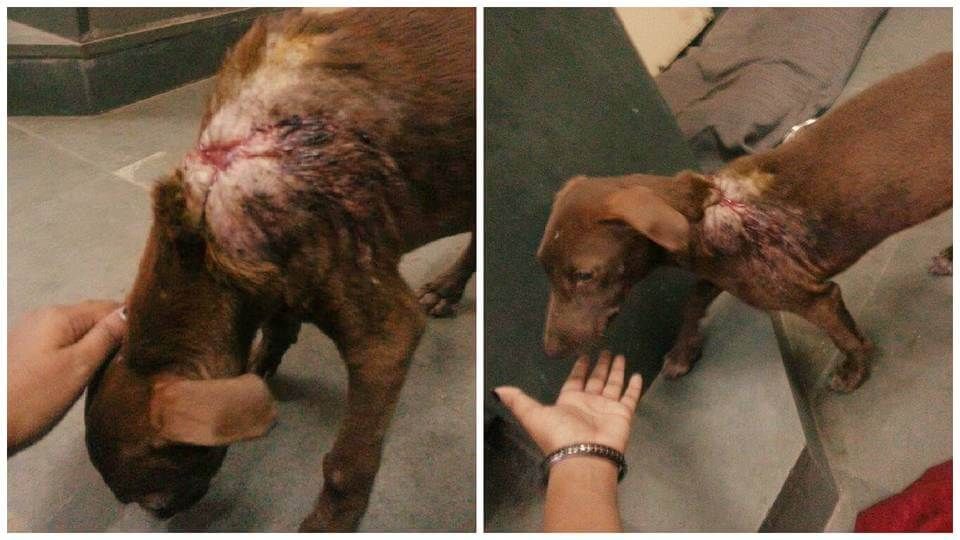 Homeless and hungry, a four-month old puppy was wandering the streets of Mumbai, India, when she was sadistically burned with acid by a human. Sadly, that was not the end of her suffering. She was then attacked by a group of other stray dogs.

Fortunately, in the midst of the melee with the other canines, she was spotted and rescued by PETA President and Founder, Ingrid Newkirk, who happened to be in town to visit PETA’s India office and saw the fight taking place.

Newkirk stepped in and rushed the pup to PETA’s office and then to a veterinarian. Hershey (the dog’s new name) had her wounds cleaned and was given antibiotics, and within two weeks, was feeling healthy, at which point she was vaccinated and spayed.

Hershey is currently living at Animal Rahat’s Sanctuary in Sangli, waiting for the right adoptive family. She has adapted well to her new living situation, making friends with her caretakers and other canine residents at the Sanctuary. (She also enjoys watching dog videos on YouTube.)

She is a fortunate dog. In India, there is a large stray dog population who live difficult lives.

Recently, various civic bodies in India passed ordinances to cull stray dogs because of regular injuries, deaths, and widespread fear among city and rural residents of walking alone. In January 2017, the Indian Supreme Court heard arguments from animal rights groups, as well as groups in favor of culling stray dogs. The Court ruled that “stray dogs have a right to live.”

Beyond a right to live, these dogs should not be subject to random hot water or acid attacks. But abuse and neglect of stray animals is common. PETA Vice President, Colleen O’Brien, told Lady Freethinker, “In some urban areas of India, homeless dogs and cats wander the streets in search of food, sleeping in doorways and under bridges—wherever they can find a bit of cover. Cruel people who consider the animals a nuisance have been known to pour hot water or caustic chemicals on them.”

Senselessly and sadistically inflicting pain on any sentient being is unacceptable. Luckily for Hershey, she was given a second chance at life. Most other strays are not afforded such a chance. In order to avoid future attacks, reduce the number of strays, and decrease the amount of suffering for both humans and animals in India, a large-scale sterilization and vaccination initiative is needed.