Day of Action May 19: Speak Up For Wild Animals Trapped In Traveling Circuses 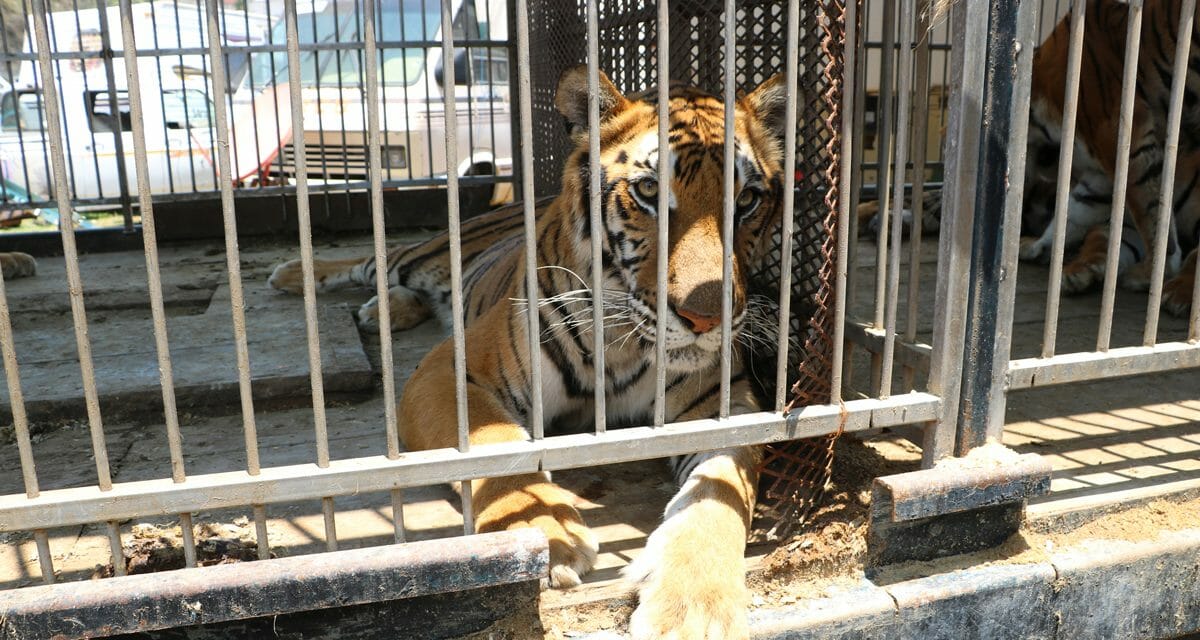 May 19 will be a day of targeted action to support a bill to help stop the brutal abuse of animals in traveling circuses.

On this “Day of Action,”  Animal Defenders International is asking animal lovers everywhere to step up for wild animals by calling and emailing their representatives and asking them to support The Traveling Exotic Animal and Public Safety Protection Act — also known as TEAPSPA.

The legislation, if passed, would amend the federal Animal Welfare Protection Act to prohibit the use of wild and exotic animals in traveling performances, and so directly end the suffering for thousands.

Those who want to speak up today for circus animals are encouraged to take the following action steps, as described on ADI’s website here:

Already, cities across more than 30 U.S. states have enacted more than 100 full or partial bans on traveling circuses that use animals — with a “partial” ban involving restrictions on the use of certain types of species, types of performances, or cruel types of “management” for performances.

“The first thing that anyone who goes to a circus involving animals needs to understand is that they are paying for cruelty,” Creamer told Lady Freethinker. “There is no circus that gives any kind of life worth living to wild animals. The animals are not there because it’s a place they want to be.”

Cruelty In Captivity: One example of why the Traveling Exotic Animal and Public Safety Protection Act (TEAPSPA)  matters

Cholita the baby bear was living happily in a forest in Peru when humans trapped and then sold her to a traveling circus. Handlers broke her teeth. They cut off her fingers, down to stubs, and beat her regularly to coerce her to comply with tasks for their circus’s  “entertainment.”

When authorities seized Cholita, also known as the “real life Paddington bear”, after more than a decade of abuse, she had lost most of her hair from the stress and horrors of her captivity. Her atypical appearance made her an unpopular exhibit at the zoo where she ended up waiting to find a forever home, and she spent the next decade locked away in another sterile, concrete enclosure.

This life of abuse and captivity was her “normal” until staff with Animal Defenders International (ADI) — investigating conditions at a nearby traveling circus — heard her story and stepped in to rescue her in 2015.

Cholita’s story of suffering is the norm for any animal captured and forced to perform in the hundreds of traveling circuses that continue to operate cruelly,  globally, and largely without accountability.

The transient nature of the shows makes it particularly difficult for local law enforcement to investigate or follow up on reports of cruelty, according to ADI.

And while Cholita’s story speaks to the brutalizing conditions animals endure in traveling circuses, she also embodies abused animals’ resilience. Today, the 31-year-old endangered spectacled bear spends her days frolicking and free at the Taricaya Ecological Reserve, a natural habitat for spectacled bears and other species located on the edge of the Tambopata reserve in the Amazon rainforest.

“We really can make a difference,” he said. “A quarter of the world’s nations already have ended this cruelty. Don’t be shy in reaching out to your representatives. We are the only voice these animals have.” 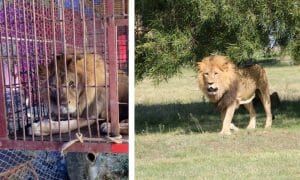 A Law That Would Make A Difference For Animals Everywhere

The Traveling Exotic Animal and Public Safety Protection Act (TEAPSPA) has been in the works for years, making the rounds over  several Congresses but stalling in committees.

Re-introducing that legislation, which bans all use of wild and exotic animals in traveling circuses in the United States, is a critical next step forward, ADI said.

Phillips said that people often feel powerless when faced with the magnitude and pervasive nature of animal suffering in the world. ADI has aimed to make taking action for animals easy for advocates, he added.

“We will give supporters the talking points,” he said. “We will show them how to contact their representatives. If people get in touch with their legislators and make their voices heard, we can end this suffering.” 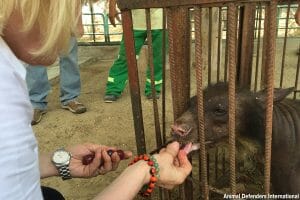 Creamer said she remembered seeing animal-involved circuses on television as a child growing up. But she never went to one in person until she started undercover investigations into circus cruelty as a campaign with ADI.

“We had heard that animals were being beaten, about the suffering and the cruelty,” she said. “But there was not evidence.”

Creamer and Phillips quickly realized the reality for animals in traveling shows involved extreme confinement in barren cages, lack of free exercise and natural behaviors, and frequent and severe abuse.

The duo took body cameras into shows, hiding them in bags, on jackets, or —  in one memorable instance — on Creamer’s hat.

“During the performance, the camera started getting really hot,” she recalled. “It burned my hat, and my head got a little burned, but we got the footage, and that made my day.”

Phillips recounted the acts of atrocity he witnessed: animals beaten with metal bars, punched, kicked, and burned with cigarette butts. He also captured on camera a handler hitting an elephant 32 times in the face with a broom.

“Behind what is meant to be children’s ‘entertainment’ is some of the most horrific cruelty you could imagine,” he said. 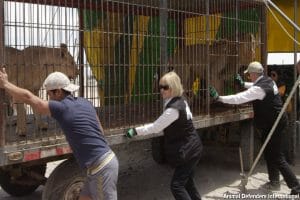 Creamer said the campaign to stop circus animal suffering started with educating people that circuses — for animals — were not “fun,” and that the venues were not, in fact, a place where parents or schools should want to take children or students.

“The children actually were our strongest champions,” she said. “Once we got the message out, in an age appropriate way, that animals were not having fun, that they wanted to be in their own homes in the wild, children got it so fast. Letters came pouring into our London office from children, saying they would never go to a circus again, telling their parents not to take them to circuses.”

ADI’s hard evidence also was critical in securing the rescue of abused animals.  The organization’s investigations have emptied 20 to 30 circuses worldwide of their animal victims, who then go to live in sanctuaries where they can live the rest of their lives in peace, Phillips said.

One example of such a safe haven is ADI’s sanctuary in South Africa, where 40 lions and tigers rescued from circuses in Colombia, Peru, and Guatemala reside.

“When animals who have spent their lives in captivity first touch grass, when they are able to play with something, to run, to chase, they absolutely transform,” Creamer said. “They come alive when they are in their natural environment. They become what they are meant to be.”

Even those who don’t attend circuses with animals themselves are impacted by the issues, as regulatory inspections of venues are expensive and largely funded by taxpayer dollars, ADI added.

The organization noted on its website that licensing fees and minimal, inconsistent penalties for violations don’t cover the costs of inspections — estimating the circus’ owners cover about 13 percent of total costs, while taxpayers end up footing an estimated 87 percent of costs.

Phillips added a word of clarification,  stressing that ADI isn’t against all circuses– just those that involve animals.

“This isn’t about ending circuses,” he said. “This is about ending animals in circuses. It’s a small industry, with a lot of cruelty.” 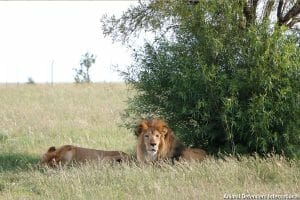 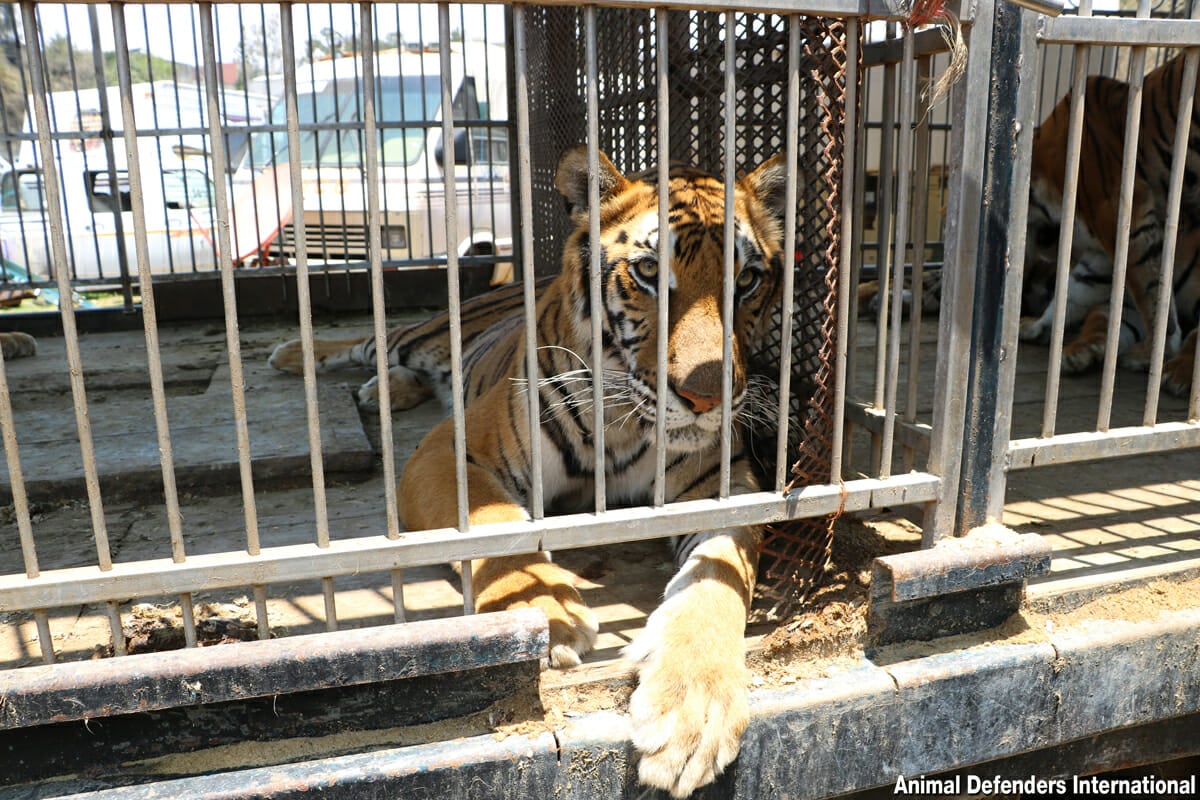