A missing two-year-old cat named Dexter was recently reunited with his family after miraculously surviving a devastating wildfire in Northern California.

Dexter was missing for nearly four months after the Camp Fire swept through 130,000 acres of Butte County, California in early November of last year, taking at least 48 human lives and over 7,500 buildings with it. He was found just a mile from his family’s burned-down home by volunteer Leslie Berard-Zaletel, who was feeding and rescuing cats within the fire zone.

Dexter is microchipped, so a rescue group working with Berard-Zaletel was able to contact his family.

In an interview with ABC10, Joy Smith, President and Executive Director of Fieldhaven Feline Center, described making contact with Dexter’s family: “We called them almost immediately, giving them the good news, and they were astounded that he survived.”

After spending 103 days in the fire zone, Dexter was flown to Missouri alongside his rescuer, Berard-Zaletal, and reunited with the Ritchie family.

The Ritchies saved three of their cats during the rushed and chaotic evacuation but were unable to find Dexter.

Paul Ritchie explained in an interview with CBS13 that after leaving Dexter behind, the family assumed the worst: “I myself had horrible thoughts about him burning up in the fire.”

On Friday, March 8, Dexter arrived at the St. Louis Lambert International Airport and was greeted by his tearful and grateful family, who awaited him with a custom-made sign bearing his name.

Smith encouraged other families who have lost pets in the Camp Fire not to give up hope: “Reach out to us, or to any groups because there are still hundreds of cats being found in the fire zone. All of them deserve to be reunited with their families.” 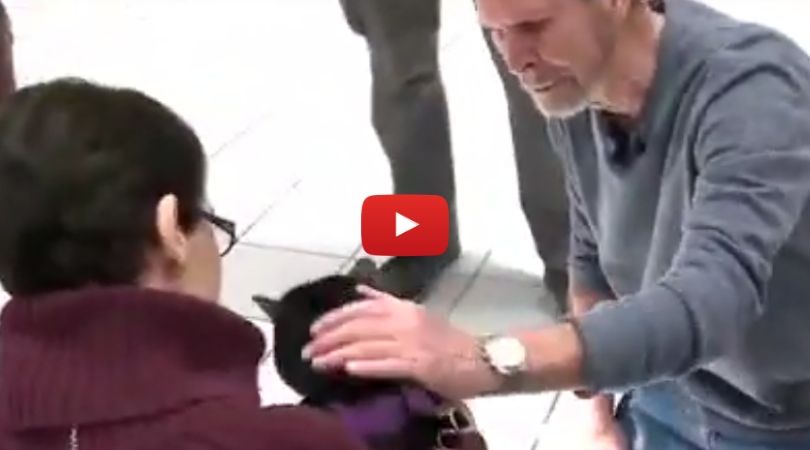