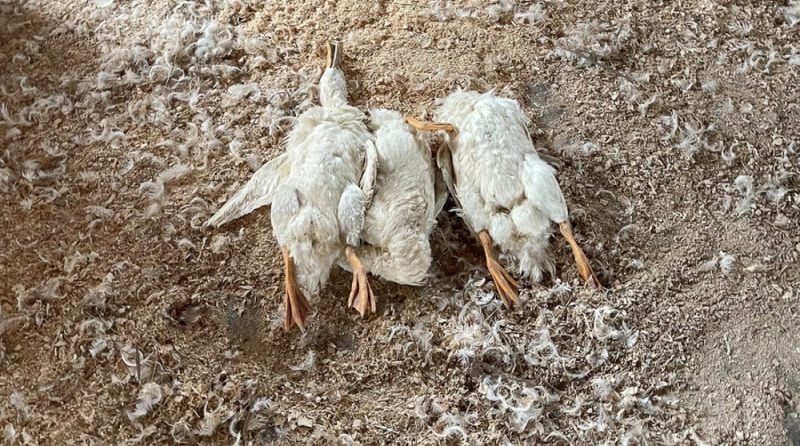 A whistleblower who worked at the second-largest U.S. seller of duck meat has reported multiple instances of alleged animal cruelty at the company that include slitting the throats of still conscious ducks, tossing live birds into grinders, and burying live ducks under a mountain of feed.

But according to People for the Ethical Treatment of Animals (PETA) and a former Culver farmhand, disturbingly cruel practices allegedly are commonplace as part of the company’s daily operations.

In an affidavit backed up by photo and video evidence provided to PETA, the former farmhand also alleged frequent occurrences in which “female ducks were excessively mounted and harmed by males,” leaving the females with “bloody, swollen, and scabby areas on their necks and other areas of their bodies,” according to the documents.

The whistleblower additionally reported that a supervisor allegedly admitted that a broken water line at a contract farm had caused 40 ducks to die of dehydration, according to PETA.

A Culver Duck Farms executive did not immediately respond to a request to address the former employee’s allegations.

PETA has asked Culver’s customers—including Albertsons, which is the parent company of Safeway, and Southeastern Grocers, parent of Winn-Dixie—to reconsider doing business with the company.

“This whistleblower paints a picture of unabated suffering at this duck farm, with birds smothered to death and ground up alive,” PETA Executive Vice President Tracy Reiman said in a statement. “As PETA urges Culver Duck Farms’ customers to reexamine their ties to this company, we remind the public that the only humane meal is a vegan one.”

It’s not the first time that Culver Ducks has come under scrutiny for its treatment of animals. After a 2016 PETA undercover investigation into Culver revealed birds bludgeoned, decapitated and housed in ammonia-ridden sheds, Harris Teeter dropped the company as a supplier.