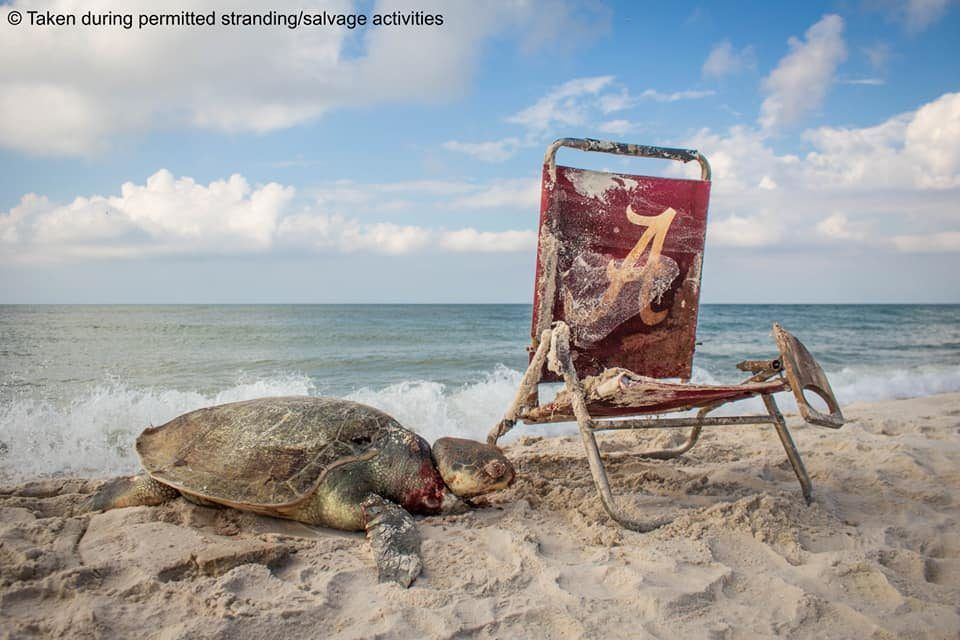 An endangered Kemp’s Ridley turtle was found strangled to death by a beach chair on the coast of an Alabama beach in Fort Morgan. The Kemp’s Ridley is listed as endangered under the Endangered Species Act (ESA). And it is classified as critically endangered on the International Union for Conservation of Nature (IUCN) Red List of Threatened Species, just 2 levels away from “Extinct” and one from “Extinct in the Wild.”

This unfortunate and preventable death was caused by humans leaving their trash on the beach. The turtle was found with red string from an Alabama football beach chair wound tightly around its neck.  Most likely the chair had washed out into the sea, where the turtle became entangled according to Fort Morgan Share the Beach- Alabama’s Sea Turtle Conservation Program. The turtle’s bloodied neck showed obvious signs of a struggle, although the exact time of death is hard to discern.

Human beings are the primary cause of the declining Kemp’s Ridley population.  Despite the protection they should be offered by the ESA, habitat loss, catching and killing, destroyed nesting sites, chemical, marine equipment, and plastic pollution, entanglement in litter, and entanglement as by-catch are all human-induced threats.

The Kemp’s Ridley turtle is similar to the Olive Ridley turtle in many ways. One of the most impressive is their nesting habits. In what is known as arribada, female turtles have a synchronized return en masse to the beach where they first hatched, to lay their eggs and nest. This is an amazing and hopefully not fleeting display of nature.

As much as human beings have the power to cause the extinction of these turtles, they have the power to stop it. Of the many conservation steps we can take, picking up our trash is one of the easiest. The photos of the washed up Kemp’s Ridley are haunting, especially because this death was so unnecessary. They unquestionably display the degree by which our actions, and our pollution, directly cause harm to marine life. A seemingly harmless act of leaving a chair on the beach has drastic repercussions.