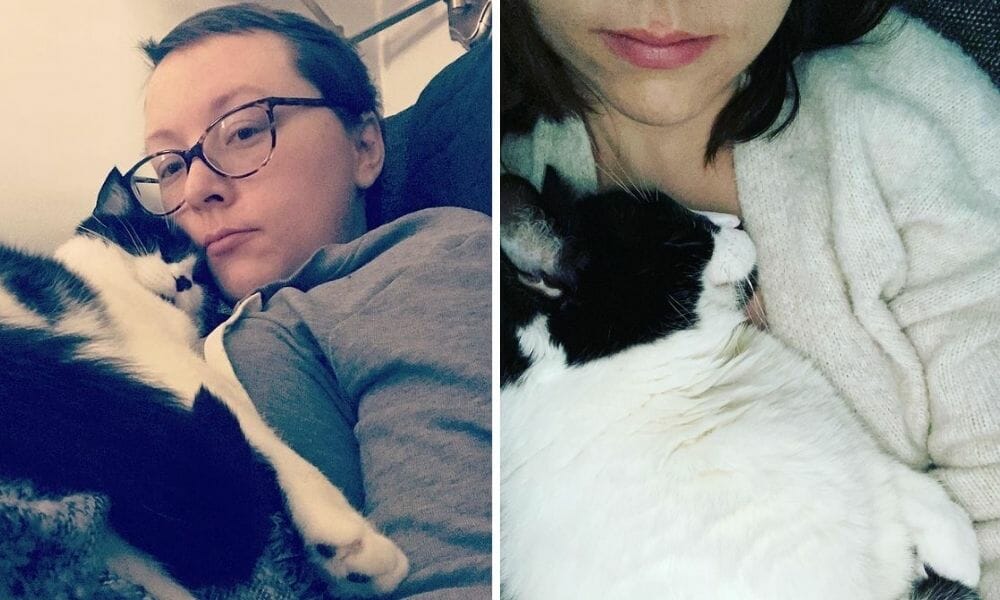 A breast cancer survivor is crediting her rescue cat, Oggy, with helping her detect the deadly, undiagnosed disease early enough to save her life.

Oggy suddenly became noticeably more snuggly and affectionate around Kate King-Scribbins, his guardian who lives in St. Paul, Minn. This behavior persisted for months, with the feline “obsessed” with laying on the left side of her chest, King-Scribbins said.

She tried redirecting Oggy, but he insisted on staying put.

The cat’s strange behavior, along with shooting pains she began experiencing in her chest, prompted King-Scribbins to check her breasts for abnormalities. She discovered a lump and later was diagnosed with stage-three breast cancer.

“I look back on the changes in his behavior towards me before my breast cancer diagnosis, and I truly believe he was trying to alert me to the dangers growing in my body,” the grateful pet parent told the Epoch Times.

Throughout her treatment — chemotherapy, radiation, and a mastectomy — she continued to observe Oggy’s demeanor.

“I noted that he continued to act like this throughout chemotherapy, and it wasn’t until I had surgery, and the cancer was finally removed, that he stopped focusing on my chest,” she said.

Kate believes she could have detected the cancer at an earlier stage if she had paid attention to Oggy’s behavior sooner.

But as a survivor with no signs of the disease, she’s very thankful to her loving, concerned companion.

“Cancer is forever part of my life, and I am okay with that,” she said. “It has made me who I am today and I am forever grateful to my amazing animals for their emotional support.”