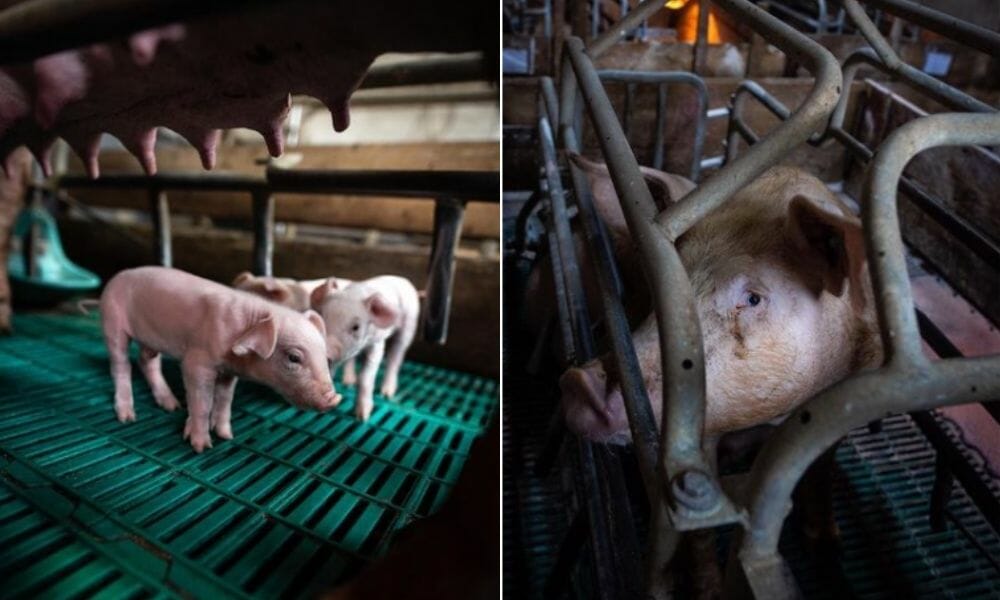 In 2018, California voters – through landmark legislation known as Prop 12 — told the world they would no longer allow products from farmed animals kept in cruel confinement to be sold within their state.

While aiming to prevent serious animal cruelty, Prop 12 also has human health implications, with increasing documentation that keeping animals confined in stressful, tight quarters can lead to the spread of infectious disease.

Yet, in the midst of both the COVID-19 and the highly-pathogenic avian influenza (HPAI) pandemics — both zoonotic diseases that scientists have tracked back to the treatment of animals — two pork producers have challenged Prop 12.

The Supreme Court is set to hear the case starting Oct. 11. The ultimate ruling will have far-reaching implications for animal welfare, human health and safety, and states’ constitutional rights to set regulations within their jurisdictions.

Here’s a recap of some of the key details and developments surrounding Prop 12  — and why you should care.

Prop 12, passed by 63 percent of California voters in 2018, prohibits sales within the state of any product derived from chickens, calves, and egg-laying hens raised or kept in cruel confinement.

Specifically, Prop 12 requires 24 square feet of floor space per pig, essentially freeing mother pigs from being kept in controversial and cruel gestation crates — cramped metal contraptions that don’t even afford enough room for the sensitive and intelligent animals to turn around. The legislation also increases minimum space requirements for egg-laying hens and calves used for veal.

Conditions apply equally to producers within California and out-of-state producers who want to sell their animal-derived products in the state.

Producers not willing to raise their animals in the more humane conditions outlined in Prop 12 cannot sell their animal-derived products within California. Those who violate Prop 12’s terms are committing a crime, punishable by fines or jail time, as well as civil penalties.

Who Is Challenging Prop 12?

Why is Prop 12 Being Challenged?

Although Prop 12 covers several species of farmed animals, opponents in their challenge focus on pigs. The National Pork Producers Council says that it will be too costly for out-of-state producers to come into compliance with the more humane, minimal space requirements for farmed animals and that the “burden” will fall primarily on out-of-state producers — with California producers having a reported 0.2 percent of the country’s breeding pigs.

Meanwhile, other pork producers have readily said they can — and will — comply with Prop 12’s new regulations. That includes large businesses, like Tyson and Hormel, as well as small, family-owned operations. Notably, Niman Ranch — a network of  family farmers and ranchers — filed an amicus brief with the Supreme Court, saying they’d like to see Prop 12 upheld.

Why Do People Who Favor Prop 12 Say It IS Constitutional?

Numerous animal welfare organizations and lawyers have said that Prop 12 is constitutional because it does not violate the Constitution’s Commerce Clause and also because states have long-standing and exercised rights in regulating activity within their borders — including enacting public health, consumer protection, animal welfare, and environmental measures.

Harvard Animal Law and Policy Program, which filed an amicus brief with the Supreme Court in favor of Prop 12, said nothing within the legislation conflicts with federal law and is no different than California’s other state-issued standards, such as for climate or clean energy goals.

Haven’t Other Courts Already Ruled On This Challenge From Pork Producers?

Yes — and in favor of Prop 12’s provisions. A U.S. District Court ruled that California’s proposed regulations do not violate the Interstate Commerce Clause, and the 9th Circuit Court of Appeals agreed that Prop 12 falls within the federal system’s allowances for states to adopt public health, safety, and ethical laws that don’t conflict with federal law or favor in-state producers.

Why Does The Supreme Court Ruling Matter?

The Supreme Court ruling has tremendous implications for animals on farms, who aren’t protected under the Animal Welfare Act — and whose well-being hinges on state regulation.

Nine other states already have adopted laws to phase out cruel gestation crates — and the enforcement of some of those laws, including Massachusetts’, now are on hold, pending the Supreme Court case.

Beyond that, law experts posit that a ruling overturning Prop 12 could also mean challenges for other state-issued standards extending beyond animal welfare – with a new report from Harvard positing that state regulations regarding climate, energy, food and agriculture, public health, product safety and food labeling also could be challenged as “unconstitutional.”

When Does Prop 12 Take Effect?

Prop 12 was supposed to take full effect this year, but California is still finalizing the policy. A Sacramento judge has ruled that Prop 12 can be enforced 180 days after California finalizes and issues the new regulations.

What does California have to say about all of this?

The State of California has issued a statement that the 9th Circuit correctly ruled that Prop 12 does not violate the Constitution and also that a Supreme Court reversal could make numerous other state-issued laws – including food labeling and quality regulations – vulnerable to future legal challenges.

California has said that while Prop 12 aims to improve animal welfare, the legislation also has far-reaching implications for consumer health, which the Humane Society of the United States noted in its amicus filing is “unquestionably a valid state interest.”

California also has said that if producers don’t want to comply with their state-issued regulations, they can still sell their animal-derived products elsewhere without any changes to their current operations.

If you haven’t already, please make sure to sign our petition standing up for Prop 12!